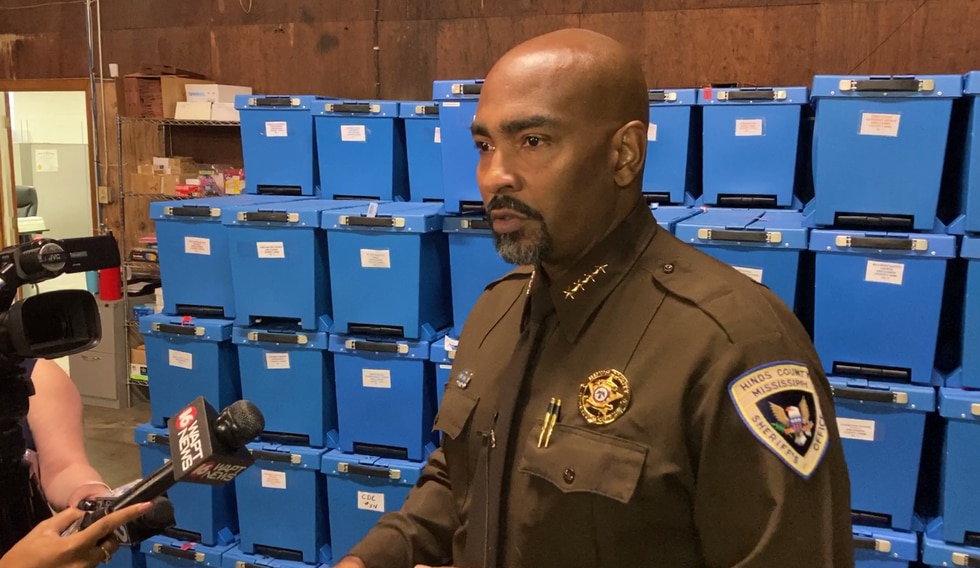 JACKSON, Miss. (WLBT) – For Sheriff Tyree Jones, it was the straw that broke the camel’s back.

Jones had just walked into a meeting with prison architects, when his prison administrator, Major Kathryn Bryan, played “I Shot the Sheriff” on his cell phone.

Testimony continued Monday at a testimony hearing that could determine whether the Hinds County Detention Center in Raymond will be taken over by the federal government.

Monday marked the start of the third week of arguments and the first time the court heard from the sheriff.

Jones, who took office in December, spoke about everything from county plans to tackle the prison consent decree, to addressing current conditions at the RDC and increasing staffing.

He went into detail about his proposal to raise detention officer salaries and implement a phased plan to increase officer pay based on years of service. He also discussed county plans to build a new jail.

Much of his testimony, however, focused on Bryan and the court-appointed monitors.

The sheriff said Bryan often worked to “diminish my authority and administration” and said controllers were biased. He said a monitor, David Parrish, ordered him to do something illegal when he was captain of investigations.

A team of monitors has been put in place to oversee the county’s implementation of its 2016 Jail Consent Decree and 2020 Stipulated Ordinance.

The direction given to Jones was unclear.

Reeves said he hadn’t heard that the monitors were biased or that Jones was ordered to do anything illegal. He asked if Jones had reported this to the court. The sheriff said he reported to his superior at the time, the late Sheriff Lee Vance.

As for the prison administrator, Jones said Bryan would not brief meetings with prison guards or court officials and was often insubordinate to him.

Meanwhile, he said Bryan was using his position in prison to secure a federal post once RDC went into federal receivership.

“The culture in detention services is that she would be the receiver and also provide jobs for some (other) people,” he said.

Jones mentioned an email exchange between Byran and Priscilla Dawson, the sheriff’s department’s quality assurance coordinator, saying Byran would be a likely candidate for the “compliance officer” position.

The Quality Assurance Coordinator is a civilian position within the department also responsible for ensuring the county meets the executive order mandates.

Jones said the correspondence reflected “the fact that (prison management) was more interested in putting the prison into receivership than in meeting the needs of my administration.”

Jones told the court that Bryan kept him in the dark at several meetings involving the prison and did not inform him of when Reeves was scheduled to visit.

He found out from another source that Reeves was visiting the prison and traveled to Raymond to meet him.

The sheriff was also unaware of a meeting in late January between court-appointed monitors and the architectural firm working on plans for a new jail.

“I didn’t know anything about it. The only reason I found out was because (County Administrator) Kenny Wayne Jones called me and asked why I wasn’t there. I dropped what I was doing and drove there,” he said.

He said about 20 people were at the rally. When he sat down, Bryan started playing “I Shot the Sheriff” on his smartphone.

“I found it very disturbing,” he said.

She submitted her first letter of resignation on Nov. 10, in part to wake the county up to jail issues, she told the court earlier.

Bryan joined the county in June after being recommended for the position by forensic monitors.

Monitors have been put in place by the court to oversee the implementation of the consent decree at the county jail.

Hinds County entered into an executive order in 2016 to address unconstitutional conditions at the detention center. The monitors were to serve as the eyes and ears of the court and provide technical assistance to the county when needed.

Jones said he initially had high hopes for Bryan and met with her and Supervisory Board Chairman Credell Calhoun shortly after her election to discuss her role in his administration.

“I made it clear that I depended on his experience and expertise … to help me move the decree forward,” he said. “I called him my ‘field training officer’.”

The sheriff said he made several changes before he was sworn in to make Bryan’s job easier, including changing the chain of command structure so that Bryan reports directly to him, rather than through others.

“It was more appropriate with the consent decree itself to have the administrator report directly to the sheriff,” he said.

Jones was sworn in on December 3, 2021 in a special ceremony at Hinds County Circuit Court.

“I asked her what she needed, and it was promoted staff – captains, lieutenants,” he said. “I told the undersheriff we needed to promote these people and it happened that day.”

The sheriff told the court he was also working on other plans, including one to increase starting salaries for new detention officers and to create a ‘phased plan’, which would increase officers’ salaries based on years. on duty.

Even with those changes, Jones said Bryan was often insubordinate, even refusing to attend a meeting with him to discuss releasing COVID-19 numbers.

Jones had appointed an employee to provide COVID numbers to the Mississippi State Department of Health.

He told the court that Bryan had relieved this employee of those duties and that he wanted to meet with her to discuss it.

“She called me back and said ‘I wasn’t going to attend,’ because she didn’t like the way I handled meetings with subordinates,” Jones recalled.

Jones also mentioned other concerns, such as Bryan refusing to use his county phone and email to conduct county business.

He said that on at least two occasions, Bryan also refused to provide federally mandated services to inmate sexual assault victims, and that she repeatedly tendered her resignation.

When the coordinator is on the spot, “her authority is limited by the lack of access to the investigations of the internal affairs service”.

Bryan was in jail when the coordinator was on leave.

Jones said Bryan did not act because he was unfamiliar with the county’s PREA policy. However, he said the policy was implemented under the late Sheriff Lee Vance and approved by the DOJ.

Bryan originally tendered his resignation to Acting Sheriff Marshand Crisler on Nov. 10, saying the resignation would be effective in February.

Bryan told Jones that the resignation was still in effect and that she wanted to use this threat to resign as “leverage to get some of the things she needed.”

When Jones fired her on Jan. 31, Bryan said she rescinded that resignation.

“I said to him, ‘I’m the sheriff. If you cancel it, you have to cancel it with me,” Jones said. “I never received anything in writing.”

A receivership would mean the county would lose control of the jail and could be forced to staff and set up facilities based on warrants issued by a receiver. County officials say a takeover would have a significant impact on the sheriff’s department budget.