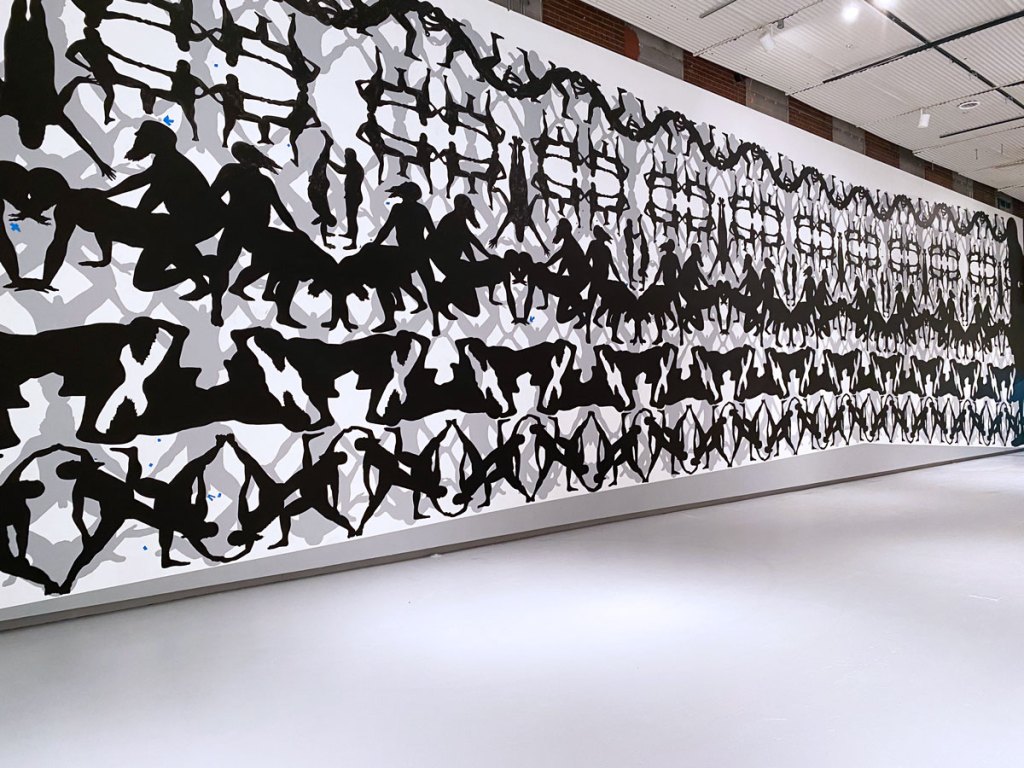 According to some estimates, over the past two years more than 6 million people have died worldwide from complications related to Covid. Is it then possible to envisage such an unfathomable number while providing a remedy for all this loss? Married artist duo Dutes Miller & Stan Shellabarger set out to do just that with an exhibition at Chicago’s Hyde Park Art Center that opens April 10.

The show, “Loving Repeating”, takes its name from the 1925 novel The making of Americans by Gertrude Stein, which traces the stories of two families over several generations. “She talks about the history that is made by the repetition of everyday life, over generations, [as] a kind of infinity,” Miller recently said ART news. “These ideas of togetherness and separation have run through most of our collaborative efforts, embracing these moments because they are fleeting. It’s not a new idea, but one that comes to mind in these times. difficult.

Although the duo have been contemplating the fragility of life for over 30 years, the mood of the current pandemic moment syncs perfectly with the subject they have been working on for decades. The major themes of the artists’ exhibition, and of their practice in general, are “unity and separation, love and heartbreak,” Miller added. “The pandemic has really put these issues at the forefront of people’s minds, so I think now the work resonates well with what we’ve been doing for years.”

The centerpiece of the show is a giant 80-by-20-foot mural that featuress various vinyl painted silhouettes of their bodies in undulating patterns. At either end is a 20 foot version of themselves. Slowing down silhouettes turn into smaller sizes. They show the duo dancing, wrestling, stretching and having sex from behind. The mural is an update of a style – garlands of cut-out paper of their silhouettes that the artists have been making in various forms for 15 years. Because the paper could tear when producing such a large piece of work, the duo preferred to create these new vinyl garlands.

Miller & Shellabarger, who first met as BFA students in the late 80s at Illinois State University and continue to maintain their own practices, also designed the mural with a forced perspective in one point, to make the room feel like it’s “pushing into the wall,” Shellabarger said.

Two smaller paper versions of the silhouettes will also hang in this space, starting at the opposite wall, seven feet high, and slowly tapering to two feet high, before meeting at the pinch point of the mural. The exhibition also includes a participatory performance in which visitors can help artists create paper cranes. When finished, visitors can throw them onto a balcony from the center mezzanine in a pile that will grow as the exhibit progresses.

The exhibition, which runs until September 3, has been in the works for about 18 months. The initial planning therefore came at a time when the artists were still unsure how or if the public could access their exhibition.

“Stan and I were still doubtful it was all open,” Miller said. “We wanted to bring the inside of the exhibit to the outside, to have something visible in case the exhibit really wasn’t open.” For example, a five-channel video installation accompanying the show will see animations of the silhouettes projected onto the windows of the Hyde.

The materiality of paper figure in the exhibition in a rather surprising way. When Miller & Shellabarger have staged installations of their paper silhouettes before (at their Chicago Western Exhibitions gallery in 2015 and at Sindikit Projects in Baltimore in 2016), they would collect the works at the end of the exhibition and burn them. . At Hyde, they have designed two alcoves that will each hold an 8-inch by 8-inch pine urn containing the ashes of each burnt facility. At the end of the Hyde exhibition, the paper elements will also be burned.

For decades, many conceptually-minded artists—from Raphaël Montañez Ortiz to Banksy—have produced works in which destruction is the key to transforming the object into art. Miller & Shellabarger are part of this lineage – once burned, their works on paper no longer exist. And if there are any surviving objects in the artists’ work, they are the end results of performances that no one has ever witnessed.

“The documentation is intentionally very different from the actual performance itself,” Shellabarger said. “I’m very resistant to video documentation because it’s not the same room. If you don’t come to the show, you just can’t see it, period. There is no other way for you to experience it.

This is directly linked to the importance of temporality with the works exhibited in Hyde Park. The silhouettes, which developed from a series of photographs they created to document the passage of time affecting their bodies and selves, also reference a desire to record their lives together. Miller said the shape adds another layer of meaning. In Miller’s eyes, a silhouette is “a representation of absence and refers to a body which is not there and which is always there”.

But ultimately, the duo’s works won’t last forever. “They have a limited period of existence and they disappear,” Shellabarger said. Miller added, “It ties directly to how we talk about death and mortality: enjoy your life, live in the moment. When it’s done, it’s done. The work that represents this does not need to be stored or kept in a valuable way that is false.

“It extends the metaphor of the fragile life, the life that doesn’t last,” Shellabarger continued. “Things can change in an instant. It has always been true. The pandemic has just brought that to the fore and brought it closer to home. »