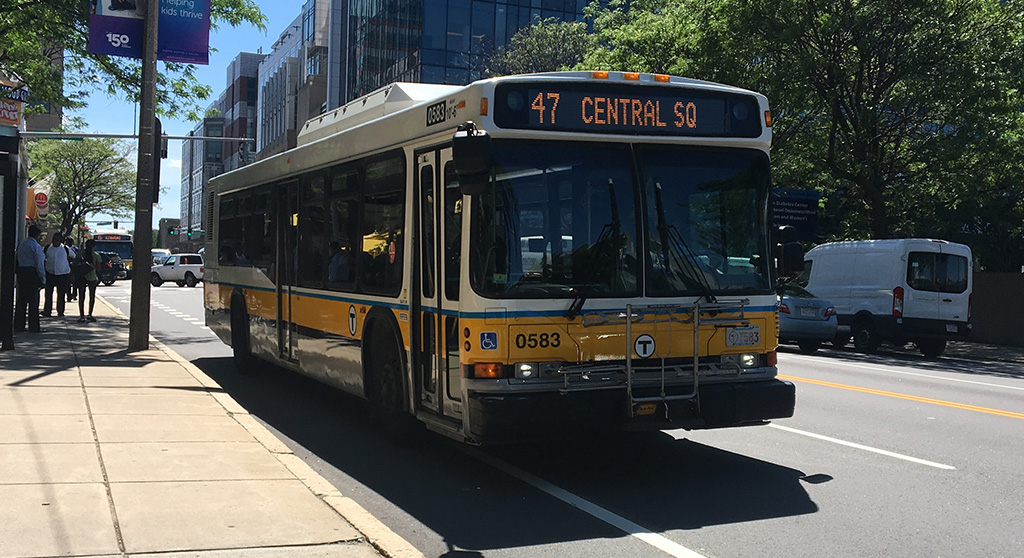 A policy order from City Council this week seeks to reverse MBTA service cuts on routes such as the 47 bus. (Photo: Byron A. Nash via Wikimedia Commons)

municipal Council5:30 p.m. Monday. With the whole council back in business after a hiatus for much of July and August, comes a proposal to separate labs from general office uses to help decide “where future lab growth is.” appropriate and where it could significantly impede other priorities, including the urgent need for more housing and the desire to have vibrant and active neighborhoods and places of business. Another zoning issue for the council to consider is the Planning Council’s 7-0 refusal to set all parking minimums at zero, despite recognizing that up to 40% of residents have no car. Clarification in the zoning text is needed, the council said, and perhaps more nuance to avoid poor outcomes in areas away from public transport.

Speaking of public transit, there’s a council policy order to roll back MBTA service cuts on lines such as the 47 bus that runs through Cambridge and Greater Boston, and a staff announcement that there will be free bus and tube passes for all teenagers at Cambridge Rindge and Latin School, High School Extension School and Cambridge Community Charter School and Prospect Hill Academy. (Homeschooled students, too.)

Given the difficulty of opening recreational cannabis stores – only two of the many proposed stores have opened in Cambridge since non-medicinal pot was passed in a statewide ballot in November 2016 – there is a council order to extend a head start in the market for ‘economic empowerment’ seekers to five years. Five stores are under construction, according to staff in a report, out of 13 applicants who have received or applied for a cannabis business license from Cambridge. There are five additional candidates in the less favored categories.

Cambridge Health Alliance should reopen its birthing centre, which closed at the start of the pandemic, advisers suggest, and the city should set up a fund to help same-sex married employees pay for surrogacy services – a matter of health care equity, like other employees who want children to have this benefit. Some councilors also want a public hearing this fall on water quality, since the city just switched from its own supply to the MWRA for the rest of the year due to chemical concerns. The future use of the city-owned property at 105 Windsor Street, The Port is also being discussed.

More orders relate to public facilities and recreation, including a call to reduce barriers around block parties; tend to diseased grass at Greene-Rose Heritage Park, 155 Harvard St., The Port; and add QR codes to historical markers throughout the city so smartphone users can immediately learn more about the person a square or street is named after. Eccentric artist Peter Valentine, honored in a resolution after his death on August 9, could be one of those people after the fast-track nomination of a corner of Brookline and Franklin streets.

Housing Committeefrom 3 p.m. to 5 p.m. on Tuesday. This committee, led by City Councilwoman E. Denise Simmons, is exploring the possibility of allowing multi-family housing in all zoning districts — or, as a November 16 City Council request put it, developing “concepts and principles for eliminate single-family and two-family-only zones in the city.” A report summarizing three discussions held by the Planning Council on the subject can be downloaded here. The committee meets at City Hall, 795 Massachusetts Ave., Central Square. Watchable by Zoom videoconference.

Chart review on records, plus

The Charter Review Committeefrom 5:30 p.m. to 7:30 p.m. on Tuesday. More work revising the city’s governance rules for the first time in 80 years. Watchable by Zoom videoconference.

Memorial Drive Closing Community Meeting, 6 to 7:30 p.m., Tuesdayand 6 p.m. to 7:30 p.m. Wednesday. City and State Department of Conservation and Recreation staff will present Riverbend Park’s extended hours of operation, which result from the closure of Memorial Drive to vehicular traffic, and hear residents’ thoughts on the current schedule. Some Riverside residents said heavy traffic was brought to the neighborhood by drivers not used to being diverted from Memorial Drive on Saturdays, leading to a series of reversals around the hold park opening hours. Tuesday’s meeting is in person at Riverside Press Park, 2 Blackstone St., Riverside. Wednesday’s meeting is online.

School Committee Retreat6 p.m. Tuesday. Priorities and plans for the 2022-2023 school year will be established during this special session. The committee meets in the Dr. Henrietta S. Attles Meeting Room at Cambridge Rindge and Latin School, 459 Broadway, Mid-Cambridge.

Plan for the offices of the Gaspareau triangle

planning board6:30 p.m. Tuesday. A 33,000 square foot addition for Longfellow Real Estate Partners at 125 Cambridgepark Drive in the Alewife Triangle area is coming up for review; Longfellow, who also owns buildings at 100 and 150 Cambridgepark Drive and a car park at 140 Cambridgepark Drive, assured the development was exempt from a moratorium on construction of laboratories and offices for the Alewife Quadrangle. A hearing will also be resumed on a potential increase in real estate ‘bond’ fees to $33.34 per square foot from the current $20.10 – money that must be paid by developers of large non-residential construction to finance housing. affordable. Watchable by Zoom videoconference. (An amendment to be introduced at Monday’s city council meeting would charge a lower fee for smaller developments.)

licensing boardWednesday from 11 a.m. to 1 p.m. Another ramen restaurant? Yeah. Waku Waku is looking to open a 1,697-square-foot, 38-seat restaurant at 33 Brattle St., Harvard Square, from 11 a.m. to 1 a.m. daily. There are also items on the agenda for entertainment licensing at Cloud & Spirits, the restaurant and bar at 795 Main St., Lafayette Square, and the Massasoit Elks Lodge, 55 Bishop Allen Drive, Central Square, among others. Watchable by Zoom videoconference.

Orders CommitteeWednesday from 2 p.m. to 4 p.m. This committee led by City Councilors Marc McGovern and Quinton Zondervan is continuing a hearing from March 30 into crimes that include “unlawful misclassification of employees as independent contractors…an epidemic in particular in the industry construction”. The measure would only allow companies that are free of pay scandals to contract with the city, and only if they “properly classify employees” and compensate them appropriately. The committee meets at City Hall, 795 Massachusetts Ave., Central Square. Televised and watchable by Zoom videoconference.

Gaspereau Zoning Working GroupWednesday from 6 p.m. to 8:30 p.m. A third meeting between community development staff and this working group discusses with owners and developers the goals for their land and how they relate to planning in the area. Watchable by Zoom videoconference. The group meets at 68 Moulton St., Cambridge Highlands. Watchable by Zoom videoconference.

A Better City Hall in CambridgeWednesday from 7 p.m. to 9 p.m. Housing advocacy group A Better Cambridge is hosting two sessions to discuss what the City Council is doing to tackle “a housing crisis – the rent is too high, people are being evicted and we are not building enough housing ( especially affordable housing) to meet growing demand.” Hour one features Mayor Sumbul Siddiqui and Councilors Marc McGovern and E. Denise Simmons; hour two features Vice Mayor Alanna Mallon and Councilor Burhan Azeem and Paul Toner Watchable via Zoom videoconference.

Building Emissions Public Forum6:30 p.m. to 8:30 p.m., Thursday. Proposed changes to Buildings Energy Use Disclosure Ordinance to reduce greenhouse gas emissions over time are being discussed by Department of Community Development staff and some city councilors . The law would affect residential buildings over 50 units and commercial buildings over 25,000 square feet. Watchable via Zoom video conference and streaming on the second floor of the City Hall Annex, 344 Broadway, Mid-Cambridge, where limited seating is available.

Common Conclave celebrating the 19th Amendment giving women the right to vote, 1 p.m. to 5 p.m. Civic, religious, political, non-profit and community organizations, as well as friends, family and allies are called to report at 1 p.m. at City Hall, 795 Massachusetts Ave., Central Square, for the march leading to the rally on Cambridge Common, near Harvard Square, ending at 5 p.m. The information is here.