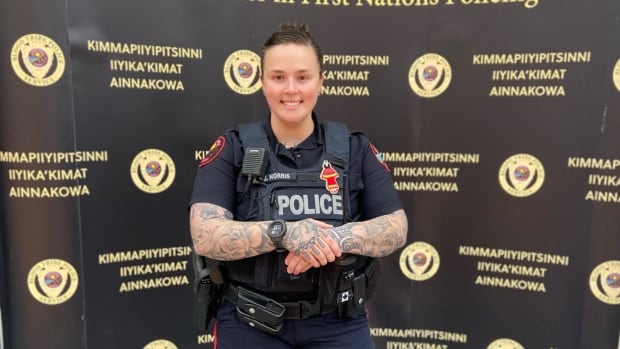 BTPS said the position is the first of its kind for a First Nations Indigenous police service in Canada.

Norris, who has worked for BTPS for over eight years, will operate as a one-person human trafficking unit called Project Kokomi-Kisomm Aakii in Blackfoot, which translates to Project Moon Woman.

Norris first approached BTPS leader Brice Iron Shirt in January to establish the role after coming through the community’s opioid crisis and noticing that human trafficking was a widespread problem.

“I was getting information about trafficking in Blood Tribe girls, [being] removed from reserve [by] non-national members [to] cities like Lethbridge, Calgary, Red Deer, Edmonton, then brought back or not brought back at all,” Norris said.

“[Trafficking] has been here, you know, probably forever. But unfortunately, we just didn’t have anyone specially trained for it.”

Norris feels honored to take on this role and said Blackfoot culture and tradition will be incorporated as part of the victims’ recovery process.

“It’s a huge problem. We need to help our own girls and our community members get out of this sex trafficking lifestyle safely.”

More needs to be done to protect young people in the community, said Blood Tribe member and elder Jackie Bromley, who is a cultural advisor for the Awo Taan Healing Lodge Society in Calgary.

“Hearing how dangerous it is, it’s scary. We have to learn things like that,” Bromley said.

Although human trafficking is pervasive in Canada, Indigenous women and girls are disproportionately affected.

In March, the Government of Alberta accepted the recommendations of the Alberta Human Trafficking Task Forcewho released a report after consulting nearly 100 experts and survivors, a process that took nearly two years.

In 2019, police reported 511 human trafficking incidents in Canada and 31 in Alberta, but Norris said the nature of the crime makes collecting data incredibly difficult.

“Everyone is really driven by statistics, but unfortunately it’s such an undetected crime. [Victims] are so brainwashed that they don’t come forward or trust the police,” Norris said.

Dr. Esther Tailfeathers, a family physician and Blood Tribe member of the Kainai Nation, said she knows women in her community who have been lured into the sex trade through human trafficking.

“Naively lured into thinking a man was paying attention to them, in fact [helping] get them out of their situation,” she said.

For Norris, taking on the role of human trafficking coordinator in addition to general policing duties is not a promotion – there is no additional funding for the role. It doesn’t matter, however.

“You can’t just sit on it. And if that means doing it on the side of my desk for now, I’m more than willing to do it.”