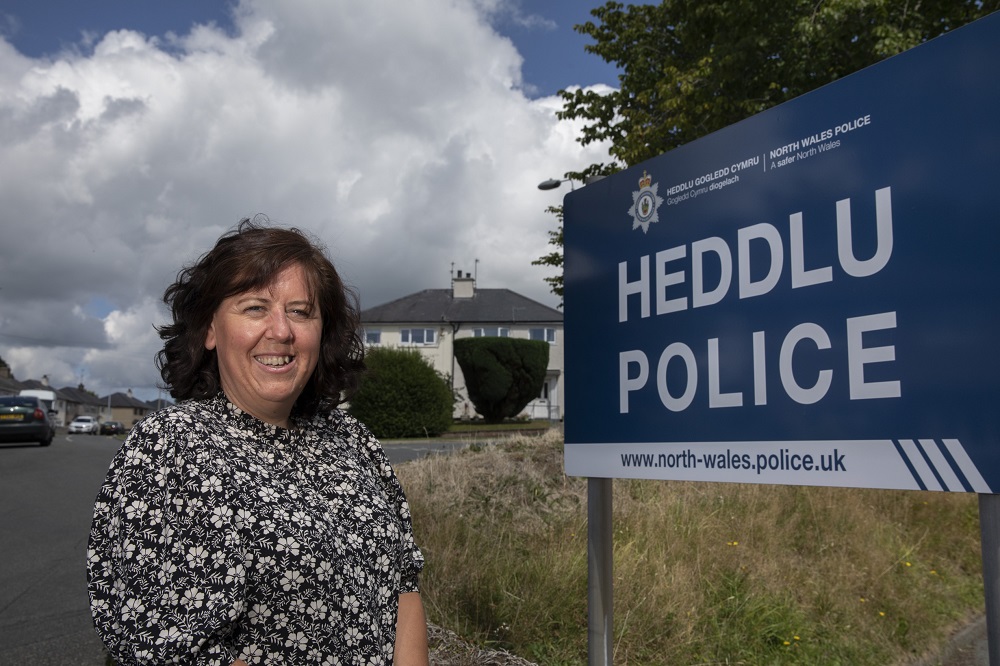 A brave cop who won an award for single-handedly stopping a gang from beating up a helpless man leads a police recruitment campaign.

Mum-of-three Clare Larkey-Jones, 48, was alone after walking off duty one evening when she broke off the attack on the Maes in Caernarfon, an act which saw her honored at a reception at 10 Downing Street.

She said: ‘I had just finished an 11 hour shift and was picking up my brother and his girlfriend from the Maes in Caernarfon on my way home when I heard a lot of screaming.

“I told my brother to stay in the car and I walked up and a bunch of guys were going after a young guy in his twenties.

“They were like a pack of wild animals and started beating him. They stopped when I arrived but they started again.

“I just went on autopilot and grabbed the ringleader, yelled at them and shot him before they got away, then called the police and ambulance.”

The application window is open from 18-29 August and details can be found on the North Wales Police website www.northwales.police.uk

Davies was jailed for the attack and PC Larkey-Jones’ bravery was praised by Judge Nicola Jones who said: “Fortunately, PC Clare Larkey-Jones, who was off duty that evening, without thinking of his own safety, clearly thinking only of restoring order, intervened.

“She found herself in the middle of all these men behaving violently.

“She very clearly and vigorously sent everyone on her way.”

His actions also earned PC Larkey-Jones and her husband, electrical engineer Gareth, a trip to London and a nomination for a Police Federation Bravery Award.

Recalling the incident, she added: “I just knew there was something wrong there and I thought if it was one of my boys who was getting beat up , I’d like to think that someone would do the same as I. Honestly, I didn’t think of it at the time.

“I just don’t like to see people being bullied. My husband asked me why I did it and it was because it was the right thing to do.

Even walking into such danger has never made PC Larkey-Jones, of Nefyn, near Pwllheli, regret joining the force where she now works with vulnerable rape victims as a liaison officer for the sexual offenses in North Wales Police Amethyst Team.

Prior to that, she spent 22 years in uniform in frontline policing in Gwynedd, joining at 25 after completing a BA in Criminology at Bangor University to help her apply to join the force.

She is still out of uniform now on Team Amethyst where she is enjoying the new role and PC Larkey-Jones, who volunteered with Women’s Aid as a student, said: ‘We deal with rape and sexual assault serious – the detective deals with the suspect and I treat and support the victim.

“I will have been on the team for two years in October and it is my job to build rapport with victims and conduct video interviews.

“They tell you about very personal things and can be very embarrassing and sometimes it’s incidents that go back 20 years or more which are quite horrifying and which they may have never told anyone before.

“It’s about spending time with a victim, having long conversations with them and being able to help them – at the end of the day, you just hope you could have made a difference.

“Often they are known to the victim because these attacks happen at home, within marriage or relationship or even on a date.

“When the victim goes to court, we accompany and support them – this is an essential part of the work of the Amethyst team.”

“I love being outside and dealing with the public and have really enjoyed being in response to and dealing with everything from traffic accidents to muggings and all the variety of things we are asked to deal with. and being with Amethyst is also very useful.

“It was also a flexible job that allowed me to be part-time while my kids were growing up, but I was always willing to work weekends and really the years flew by.

“I’ve missed several family celebrations, birthdays and had to work late and Christmas Day etc. but the police are a 24/7 job we can’t close because It’s a national holiday.”

Chief Superintendent Sian Beck said: ‘It’s a 24 hour service so we’re not working 9 to 5. You don’t always come home when you want and you’re not always home when your family celebrates holidays. .

“You see people when they are most vulnerable and at the worst time in their lives and it can be overwhelming.

“However, on the other hand, being a police officer is the most amazing career with a multitude of different opportunities.

“Like Clare, you can have a very long and successful career as a patrol officer, gaining a wealth of experience and knowledge of the communities we serve.

“Whatever path you choose, you will work with amazing colleagues and make a real difference in people’s lives every day.

“It’s a huge responsibility but also a great privilege.”

For more details on how to apply, go to www.northwales.police.uk