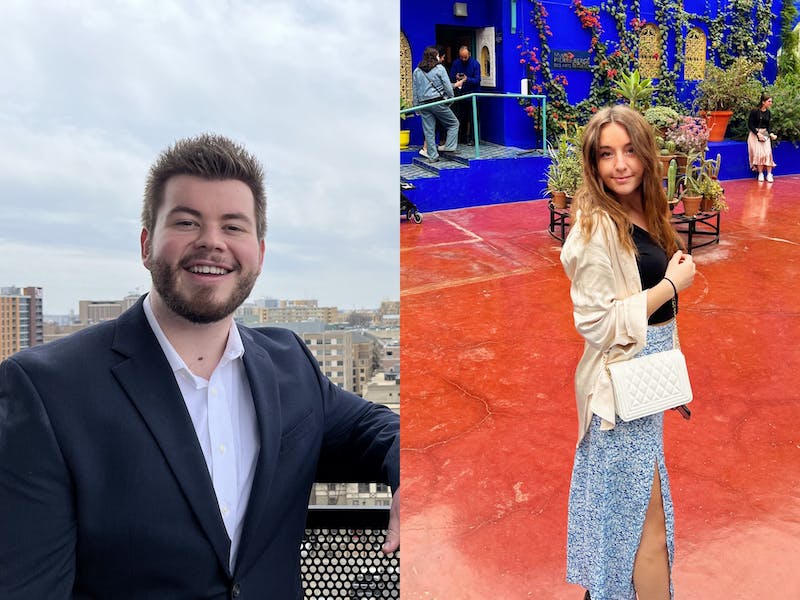 Margo Wyatt and Liam McLean were high school acquaintances, but it wasn’t until college that they connected and realized they would be a powerful duo “in terms of getting things done,” says McLean.

Each describes the other as ambitious and hardworking, with big ideas and plans to accomplish them; seeing these qualities reflected in each other inspired the two to form a ticket and run for upper class positions at the University of Wisconsin-Madison.

The McLean and Wyatt Ticket order more than half of the vote, which comfortably earned them the titles of senior class president and vice president, respectively, for the upcoming academic year 2022 to 2023. Their Platform prioritizes achieving a more unified and engaged campus, facilitating networking events for senior graduates and improving campus dialogue and culture regarding sexual assault and harassment.

Both are energetic leaders who are passionate about the university. Wyatt praised the campus’ vibrancy and sense of community, and McLean said that looking back on his experience here, he found the greatest satisfaction in making change and taking on leadership roles.

McLean previously served as president of the Interfraternity Council (IFC), driven by a desire to shift the culture from a “self-isolated community” to a “purpose-driven platform.” He has sought to drive engagement between Greek Life and the community at large, spearheading initiatives such as a partnership with Feed the changean association that fights against food insecurity.

But McLean’s efforts to prevent sexual assault are perhaps most notable. Studies have indicated an alarming rate of sexual violence within Greek Life, and McLean organized trainings and events to educate students and break the stigma felt by survivors.

McLean said his most rewarding experience as President of IFC has been working with PAVE (Promoting Awareness, Victim Empowerment) to host their first day of denim. “To see this [over 1,000] people felt compelled to stimulate a dialogue” around such a pervasive and serious issue had a profound impact on McLean.

A study 2020 from 33 US universities, including UW-Madison, reported that approximately one in four women and one in 14 men experience sexual violence while in college. Wyatt cited this statistic as a sobering indication of the urgency of these initiatives and reminded students that it is statistically likely that “most people on campus have close friends who are survivors.”

McLean and Wyatt also aim to improve networking on campus to help seniors find jobs after graduation. UW-Madison has one of the largest and most active alumni networks in the nation, and Wyatt and McLean aim to leverage that and provide greater opportunities for students.

Wyatt is a founding member and former Chair of Diversity, Equity and Inclusion of badger tank, an entrepreneurship club that works with students to turn their business ideas into reality. Badger Tank connects students with resources and individuals who will help them achieve their career goals, and Wyatt hopes to use these experiences to provide similar networking opportunities for students of all disciplines.

“Not everyone is sure about their future…because humans have a natural tendency to be afraid of rejection,” McLean said. “The idea of ​​these alumni networking events is [creating] a chance for people to deal with rejection in a comfortable environment.

Enjoy what you read? Get content from The Daily Cardinal delivered to your inbox

The participation rate in the elections of the senior classes fluctuated around 5%; Wyatt hopes to change that. She and McLean aim to make their office as accessible as possible and foster an open line of communication between class officers and students.

Wyatt added that the impacts of the COVID-19 pandemic have been felt throughout upperclass college careers, and it has deeply affected students’ social and professional lives. She and McLean aim to combat this by bringing the campus together and breaking down the barriers that separate students from each other.

McLean said his experience running the campus opened his eyes to the “structural divisions” that exist on campus, separating students based on academic field, identity, and more. He and Wyatt aim to create events and programs that “[bridge] those fractured parts of campus that might otherwise not engage with each other.

“We are in boxes in terms of what we study and our identities. That’s what we know,” McLean said. “But that’s where I see the potential for community development. We have to break the cardboard.

The Daily Cardinal has covered the University and community of Madison since 1892. Please consider donating today.

7 of the best thrift stores on Commercial Drive in Vancouver