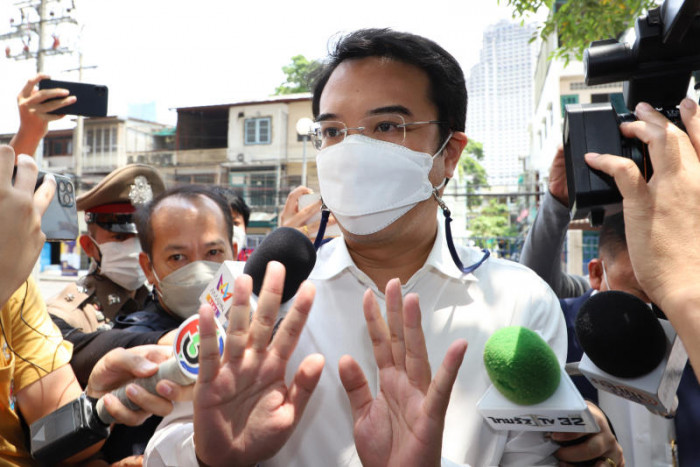 Chuan tells Democrats to clarify their stance on Prinn case

Former Democratic Deputy Leader Prinn Panitchpakdi is mobbed by reporters as he arrives at Bangkok’s South Criminal Court in a police van on Sunday. He was released on bail. (Photo: Apichart Jinakul)

Former Democratic leader Chuan Leekpai on Monday called for a clear explanation from the party of its stance on the sexual harassment charges against former deputy leader Prinn Panitchpakdi.

Chuan said he would not interfere in the work of the party executive, but asked them to show responsibility and clearly explain the party’s position to the public. This affected the reputation of the party and its supporters.

Democratic Leader Jurin Laksanawisit and other influential members said the allegations against Mr Prinn were a matter for the police. The party would not protect or condone sexual harassment.

However, some party members said that was not enough, as its executive members had chosen and appointed Mr Prinn as deputy leader.

“As the organization where the person accused of wrongdoing worked, we have to show accountability,” said Ms Pimrapee, who is on the party executive, without mentioning Mr Prinn by name.

Police have filed charges in three cases against Mr Prinn – two for indecent assault and one for alleged rape. He denied all allegations and was released on bail.

The rape charge was registered with police by Hathairat Thanakitamnuay, wife of anti-government activist Thanat, better known as Luk Nut, at Lumpini police station on Thursday.

His decision to press charges came after an 18-year-old student lodged a sexual harassment complaint against Mr Prinn at the same police station on Tuesday.

Mr Prinn, who is not an MP, resigned from all Democratic Party posts on Thursday to fight the allegations.