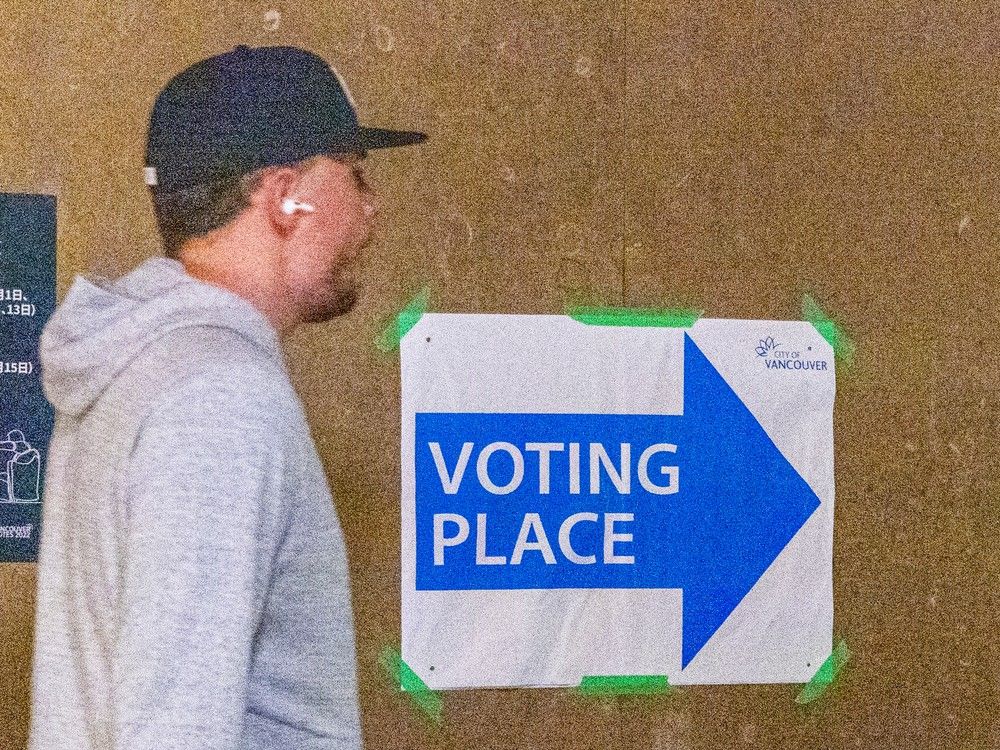 Daphne Bramham: A desire for change could drive voters to the polls

Metro Vancouver voters are a disappointed and discouraged bunch – something that will almost certainly be reflected when the municipal election results come in later tonight.

And it could be a long night if a strong desire for change translates into strong voter turnout and ultimately reverses the long-standing downward trend.

The next issue of Vancouver Sun Informed Opinion will soon be in your inbox.

Nearly 60% of Metro Vancouver voters want change. But nowhere is the desire for change more deeply rooted than in Vancouver and Surrey, according to the Léger poll conducted for Postmedia.

Three-quarters of those polled in Surrey want change. In Vancouver, it’s 69%.

Digging deeper, the pollster found that a majority in both cities believe they are worse off than four years ago. They are deeply dissatisfied with mayors and councils and with all aspects of city life.

Although housing affordability is the main issue, it is far from the only one.

The majority of residents in both cities believe that their municipal governments have failed to do the basics — that the services they receive do not justify the taxes they pay.

Change is a reason to vote, which is why traditional political wisdom holds that governments are as likely to defeat each other as they are to be defeated by the competition.

The overwhelming desire for change among Leger respondents also helps explain why 70% said they were certain or very likely to vote.

It would be an extraordinary turnaround from 2018, when less than 40% of eligible people in both cities voted. But it’s a prediction that should come with some caveats.

First, these respondents are part of Leger’s panel, which means they are already more engaged than the average voter.

Second, nearly 40% of these highly engaged respondents did not know who they would vote for, meaning Leger was hesitant to predict who would win the two hotly contested mayoral races.

In the survey, Ken Sim had a 20-point lead over incumbents Kennedy Stewart and Colleen Hardwick. In Surrey, Brenda Locke was the choice of 25% of the deciders, more than double Sukh Dhaliwal and Gordie Hogg and more than triple the support for incumbent Doug McCallum.

But will the less engaged undecided vote? Maybe not, since voting in a municipal election is much more difficult than in federal and provincial elections. Unlike choosing one person from a single list in these elections, there are 137 names on Vancouver’s ballot and 84 on Surrey’s.

Surrey voters can choose one person for mayor, up to eight for council and up to six school trustees.

Vancouver voters can choose one for mayor, up to 10 for councillor, up to nine for school board commissioner and seven for park board commissioner. To complicate matters further, the Vancouver candidates are not listed in alphabetical order. In fairness to those who are closer to Z than A, it was decided that they should be listed in a confusing random order.

With so many choices, less engaged citizens may find it too difficult to vote and stay home.

So why vote in Surrey, Vancouver or any other municipality?

The flippant answer is because you can. This is not something to be taken lightly in these days where autocracies may soon outnumber democracies and where it has taken so long for so many people – women, indigenous and Asian – to gain the right to vote. .

If it’s too esoteric, vote out of self-interest.

Is the city you see now the city you want tomorrow? If so, vote for the incumbents and anyone whose views align with theirs.

If the city doesn’t reflect what you want now or in the future, do some research to find out which parties’ and candidates’ views match yours. The Surrey and Vancouver websites contain information on each candidate’s background, priorities, political priorities and links to their financial disclosures.

But choose carefully because whoever gets elected will be there for four years.

They will make decisions that will fundamentally affect your life.

They will be paid even if they are charged with a criminal offense because neither the Vancouver Charter nor the Municipal Act provides for the removal of elected officials.

Partly in response to Rob Vagramov’s refusal to step down in 2019 when he was charged with sexual assault early in his first term as mayor of Coquitlam, the BC government made it mandatory for anyone criminally charged with taking paid leave until the charges are resolved.

Made in April, the change was not retroactive and came after Surrey’s outgoing mayor McCallum was charged with mischief. His five-day criminal trial is scheduled for October 31.

Finally, it is important to remember that not all positions need to be voted on. It is perfectly acceptable to vote for only one candidate and hand in the ballot to be counted.

Just ask Mandeep Nagra who was elected to Surrey council in 2018 by a margin of 261 votes or Sim who lost the Vancouver mayoral race by 957 votes or the incumbent mayor of West Vancouver, Mary Ann Booth, who won by 21 votes.

Better yet, talk to the mayors of Bowen Island, Peachland and Clinton whose margin of victory was one or two votes.

More news, less ads: Our in-depth journalism is possible thanks to the support of our subscribers. For just $3.50 a week, you can get unlimited, lightweight access to the Vancouver Sun, The Province, National Post and 13 other Canadian news sites. Support us by subscribing today: The Vancouver Sun | Province.

Your spouse may be suffering from a midlife crisis