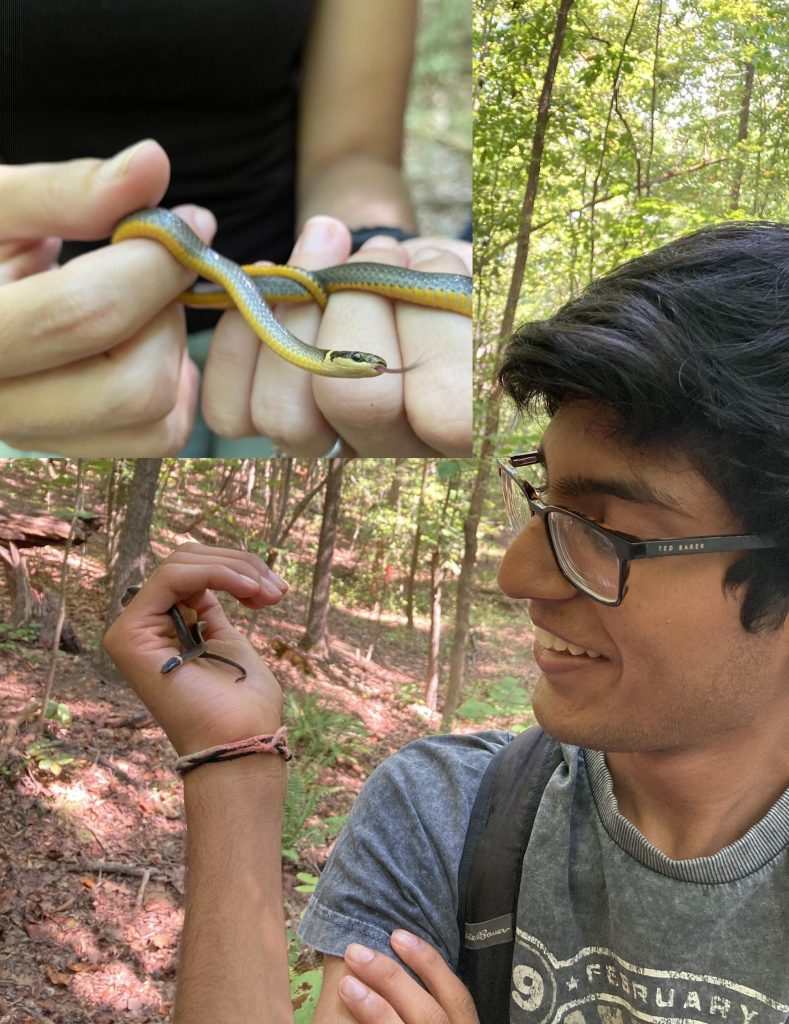 On a sunny Friday in September, Dr Nicki Cagle led a herpetology walk in the Duke Forest with the Wild Ones. The Wild Ones is an undergraduate club that aims to increase appreciation for the natural world through faculty-led outings. Herpetology is the study of reptiles and amphibians.

Dr. Cagle is a senior lecturer at Nicholas School of the Environment at Duke and the Associate Dean of Diversity, Equity, and Inclusion. In addition to teaching environmental education and natural history courses, she is also a scientific advisor for a citizen science project focused on reptiles and amphibians, or herpetofauna, in the Duke Forest. Volunteers survey pre-determined sites in the Duke Forest and collect data on the reptiles and amphibians they find.

“We get a sense of abundance, seasonality…and how the landscape affects what we see,” says Dr. Cagle. There is evidence that herpes populations in Duke Forest and elsewhere are in decline.

The project is based on transects, “a sampling plan…where you have a sampling point at various intervals” along a line of a predetermined length. In this case, the sampling points are “traps” intended to attract reptiles and amphibians without harming them. Each site has a large panel placed on the ground. “Different herpes are more likely to be found under different objects,” says Dr. Cagle, so the project uses both wood and metal cover panels.

But why would snakes and other herpes want to hide under blanket boards, anyway? Reptiles and amphibians are “cold-blooded” animals, or ectotherms. They cannot regulate their own body temperature, so they must rely on their environment for thermoregulation. Snakes can bask in the sun on a rock in cold weather, for example, or hide under a well-placed plank of wood to escape the heat.

Salamanders using the cover boards may be attracted to the moist environment, while “snakes tend to go under the cover boards either to hide – as if they are about to molt and are more vulnerable — to search for prey, or just to maintain the right temperature,” says Dr. Cagle.

Citizen scientists typically check maps once a week and no more than twice a week. Volunteers should avoid checking traps too often because of a phenomenon called “trap shyness”, where animals may begin to avoid traps because they have learned to associate them with pesky humans knocking over boards and exposing their otherwise comfortable resting places. By checking traps less frequently, scientists can reduce the likelihood of this happening and minimize disturbance to the animals they study.

Dr. Cagle gave the Wild Ones a behind-the-scenes tour of some of the cover panels. Using a special hook tool conveniently hidden in a PVC pipe next to the first cover panel, we flipped each panel over and looked carefully underneath for slippery movements. We did not find any under the first cover boards.

But then, under a large metal plate, we saw a small snake wriggling in the leaf litter. There was collective breathing and exclamations of “snake!”

Dr. Cagle captured it and held it carefully in his hands. Snakes, especially snakes as young as this one, can be crushed too easily. We got together to get a closer look at the baby snake, a species with the adorable name “worm snake”. It was dark above with a surprisingly pink underside. The pink belly is a key field mark of worm snakes. Earth snakes are also found here and look similar, but they tend to have tan bellies.

After a minute or two, the worm snake made a successful bid for freedom and squirmed under the board, disappearing from sight almost immediately.

Some of the cover panels also revealed other animals. We found a caterpillar pupa attached to one and several holes—probably made by small mammals—under another.

Anyway, we can assume it wasn’t a snake. According to Dr. Cagle, the term “snake hole” is misleading. Most snakes do not make their own holes, although some snakes use existing holes made by other animals. An exception is the bull snakewho is known to dig.

We found a young five lined skink basking on one of the metal cover boards. (Thermoregulation!) Juvenile five-lined skinks are colloquially known as blue-tailed skinks, but the name is somewhat misleading – adults don’t have a blue tail at all.

The snakes we were looking for, meanwhile, were often elusive. Some disappeared under the leaf litter before we could catch them. Sometimes it was hard to tell if we were even looking at a snake.

“What are you?” Dr. Cagle mumbled at one point, crouching down to get a better look at what was either a stick snake or a stick snake. “Are you an animal? Or are you just a wet thing? (Just something wet, it turned out.)

Later we found at least three juvenile grass snakes (Spotted Diadophiss) under different cover panels. One of them was particularly cooperative, so we circulated it around the group. (“All snakes can bite,” Dr. Cagle reminded us, but “some tend to bite less,” and this species “tends not to bite.”) Its lithe little body was surprisingly strong. The little snake coiled itself tightly around one of my fingers and seemed content to relax there. A living, breathing, reptilian ring. It was definitely a highlight of my day.

“A newt is a type of salamander,” says Dr Cagle, “but newts have an unusual life cycle where they spend part of their life cycle on land…and this is called their phase eft.” Once adults, they return to the water to reproduce.

We learned that Copperheads “tend to be larger for their length” and Spotted Salamanders cross the forest paths in large numbers on warm, rainy nights in early spring when they return to moist areas to breed.

Disclaimer: Handling wild snakes can lead to snakebites. It can also be stressful for snakes. Additionally, some snakes in this area are poisonous, and it’s probably best to familiarize yourself with these before approaching the snakes rather than after. The snakes are surprisingbut please observe wildlife in a safe and responsible manner.