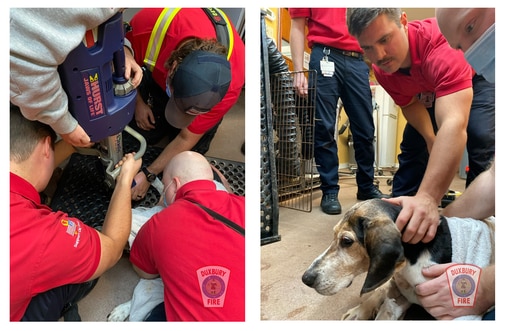 Every day, police officers respond to reports of all kinds of events and non-events, most of which never make the news. Here is a sample of lesser-known – but no less remarkable – incidents from police logbooks (aka blotters) in our suburbs.

The 11th of November Duxbury firefighters were dispatched to rescue a dog that had its paws stuck in a metal grid. Firefighters used the jaws of life and other specialized cutting tools to free the dog’s paws from the grid. The Duxbury Fire Department has released photos of the operation on Twitter and wrote: “Hunter, 14, was very grateful and was taken to a local vet as a precaution.”

* DOG RESCUE * Today, our firefighters were dispatched for a dog with its paws trapped in a metal grid. DXFD used many specialized cutting tools to remove the two legs. Hunter, 14, was very grateful and was taken to a local vet as a precaution. #dogrescue pic.twitter.com/0mVJ69MPO1

At 1:28 p.m. on October 21, Burlington police were contacted by security personnel from a company on Blanchard Road who wanted to report a strange find. They told police that landscapers discovered what appeared to be human remains on the property. Police intervened and informed the chief medical examiner’s office. Police Chief Thomas P. Browne said the case was resolved because “the medical examiner determined the bones were not human, but” a mixed pile of non-human bones. “

At 1:26 p.m. on November 13, Tidy police received a call from a Marlboro Road resident who reported that someone had put trash in their mailbox. He requested that the incident be recorded.

At 4:06 p.m. on September 13, Marble head police have received a report of a parakeet that was found on Humphrey Street.

At 2:02 p.m. on October 22, Peabody Police were contacted by a Franklin Street woman who said her parrot, Lola, had escaped from her cage and was missing. Police advised her to post information about the lost bird on local Facebook pages in case anyone saw it.

BE CAREFUL OF THE TYPE WEARING THE CROWN

At 10:54 am on October 14, Bridgewater police received a call about an unwanted customer at a laundromat who refused to leave the property. He was described as a man dressed in white, wearing a Burger King crown and a white towel around his head, and shouting curses. The next day, police received a similar complaint about a suspicious man harassing customers at Cumberland Farms. He has been described as dressed in all white and wearing a crown. Police said the individual is a level 3 sex offender and was told that if he resides in town he should register with the police department. The incident is under investigation.

At 6:51 p.m. on October 25, Burlington police received a call from a resident of rue Paula who said they saw a man wearing a dark shirt and gray shorts looking into his house with a flashlight. She told police she saw him on her Ring camera. According to the newspaper entry, police responded and confirmed that the man in question was a “nearby resident looking for a missing pizza delivery.” No further action required. “