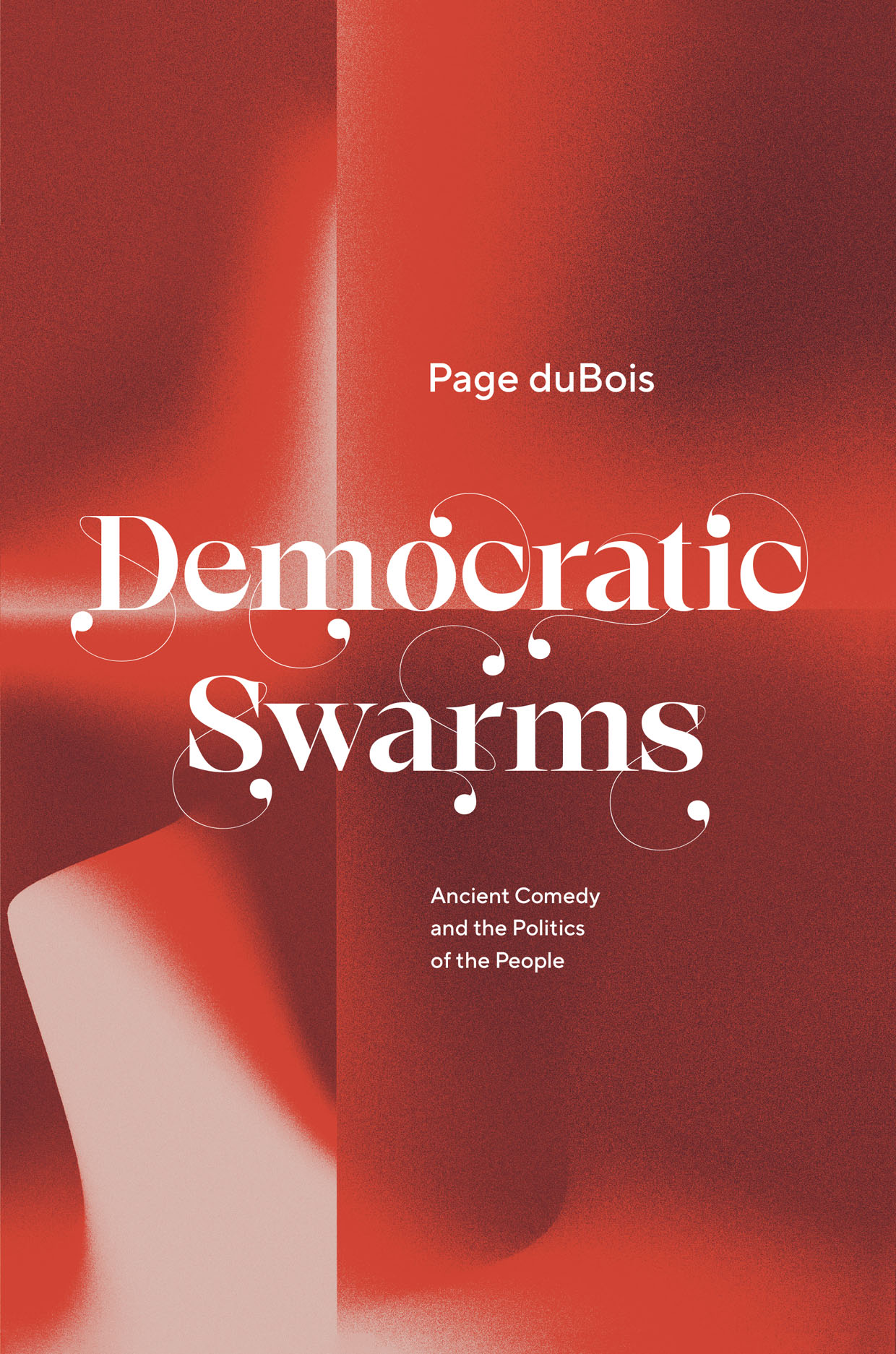 In his new book, Democratic swarms, Page duBois explores the vivid, chaotic and anti-authoritarian glory of ancient Greek comedy. Often overshadowed by the study of Greek tragedy, comedy, as duBois demonstrates, overflows with joy, freedom of expression and the irrepressible energy of the swarm that can serve as a model for political resistance movements in Europe. today. Traveling deep into the world of the ancient Greeks, she reflects on her fascination with these pieces and discusses some of her favorites.

The Greek tragedy seemed dark, laborious, painful, . . . tragic. I first encountered it in performance as poorly filmed, blurry, black and white cinema. A play by Sophocles, perhaps Oedipus Rex, performed in the courtyard of the Sorbonne in Paris. Actors walking cautiously, heavily, in their stage boots, with huge masks that prevented expression, lines spoken in Greek through inadequate vocal tubes. Dignified, but depressing. I continued to study Greek but was made to understand that tragedy was an elitist genre, difficult and demanding, bearing the terrible weight of suffering of the Hellenic tradition. Hegel, Nietzsche, Freud, Barthes, others to follow, ruminating on the pain, the mourning, the misery of Oedipus’ family.

Then, during a distant trip to Greece, which I had avoided for a few years, not wanting to spoil my sense of the pure and austere Attic civilization imparted in classical courses in contact with modernity, I found myself on a hydrofoil, speeding across the sea from Piraeus to the port near the ancient site of Epidaurus, dedicated to healing, to the god Asklepios. The theater connected to the sanctuary, which once performed miraculous acts of purification and repair, is one of the wonders of the ancient world. Tour guides reveal its extraordinary acoustics, directing their tourists to the highest levels of the amphitheater and then throwing a pin into the orchestra section of the open-air site, a pin heard with crystal clarity.

The performance I saw there of one of Aristophanes’ comedies was glorious. The music, largely based on popular culture and folk music, dancing, a chorus dressed in brightly colored costumes, and a pattern of relentless allusions to current affairs, politicians and other notables, raked in threats scatological, sexual and hilarious comedy against those in power in Greece at the time. The performance was exhilarating, chaotic, anarchic, tumultuous and utterly captivating, and I began to think, how does this fit into the restrained, often austere, Anglo-Saxon presentation of the ancient Greeks for which I I signed up as a budding classicist. .

Comedy has been the poor son-in-law of ancient drama. A long genealogy of philosophers and philologists has privileged tragedy, viewing it as the deep and significant core of ancient Athenian life – its democracy, philosophy, legal system, and politics. What remains of Aristotle Poetic guided them towards this insistence on the tragic. The comedy section of this most influential work has not survived antiquity, and in what remains he seems to find comedy relatively trivial and base. My training in the classics supported a sense that comedy was less important than tragedy, more topical, even embarrassingly vulgar, trapped in its moment of creation and unworthy of saving.

But in fact, comedy was as important in ancient Athenian dramatic festivals as tragedy. The Democratic City encouraged both genres, at one point even paying those who attended performances. And the ancient drama depicted not only the pangs of a mythical past, the sufferings of royal families and conquered warriors and slaves, but also the contemporary, vital, lecherous, even ecstatic daily life of the collective, of the multitude, of the swarm, with all its desires and hatreds. Our ancient Greek heritage includes not only people from all over the Mediterranean Sea, people of all colors, but also comedy as a force to imagine, to overthrow the powerful, to live with or as animals, to abolish the slavery, refreshing democracy, imagining change. Perhaps more difficult, in fact, than tragedy to stage, since comic poets wrote less, and the preparation of those comic plays chosen by the city to be performed required large sums, to train the chorus, provide costumes, perhaps individualized. Some scholars believe that the members of Aristophanes’ chorus Birds, for example, were flamboyantly dressed in costumes reflecting their various bird identities; the playwright mentions, in a cloud, a swarm of birds, the partridge, a whistling duck, a halcyon, a clipper, an owl, a jay and a tortoise, a lark and a sedge bird, a finch, a dove, a rock – dove, dove, cuckoo, falcon, hoopoe, willow wren, vulture, porphyry, kestrel, hornbill, nuthatch, moorhen, blackbird, hoopoe, nightingale. Costumed, bird by bird. Jeremy Mynott wrote a wonderful book, Birds in the Ancient World: Winged Words, which brings them to life and reminds me of their vulnerability in our world of cataclysmic warming. The Birds of Aristophanes have crazy ambitions: to remember the wild landscape of avifauna, to invent a utopia and then see it fall, to imagine a city that would welcome escaped slaves, to use the Athenian freedom of expression, parrhesiato challenge, ridicule and insult the powerful of the city.

In the now-lost comedies there were city choirs, helots (the slaves of the Spartans), refractories, centaurs, satyrs and many more. Surviving choirs, other swarms, other sometimes wild, anarchic, dancing and singing choirs, frogs, clouds, women on a sex strike, women celebrating their rituals, women inventing a new policy for their city, a utopia of communitarianism , of communism, of the luxury community. These teeming choruses of ancient comedy foreshadow today’s protests, demands for the impossible, international crowds of Occupy, Black Lives Matter, the Sunrise movement, Extinction Rebellion, the Umbrella movement, and many more at come, in our time.

In Aristophanes’ comedy The Women of the Assembly, the choir and their leader use their domestic skills and economic power to rule benevolently and satisfy their sexual desires, notoriously excessive and unfulfilled in the gender ideology of Athenians. A very strong woman, Praxagora, lists the benefits that will come from women’s rule, including “more poor”. Praxagoras declares that his first act will be to “communicate”, i.e. to make “common”, koinon, land, money or money, and all that belongs to each of them. Women will administer this community, and those who own movable assets such as coins will contribute them to a common fund. The chorus supports his projects, asking him to have a “philosophical mind”, in a language that reminds me of the very different utopianism of Plato, beloved of conservatives:

Because it is for the prosperity of all

that from your lips springs a bright idea

to brighten the life of the inhabitants of the city

The piece ends with joyful dancing, singing and a voluptuous feast. I can not wait to see it.

Wood page is Emeritus Professor of Classics, Comparative Literature, and Cultural Studies at the University of California, San Diego. She is the author of several books, including Sappho burns, Slaves and other objects, Outside Athens: The New Ancient Greeksand more recently, A. Million and One Gods: the persistence of polytheism.

Democratic swarms is available on our website or from your favorite Bookseller.