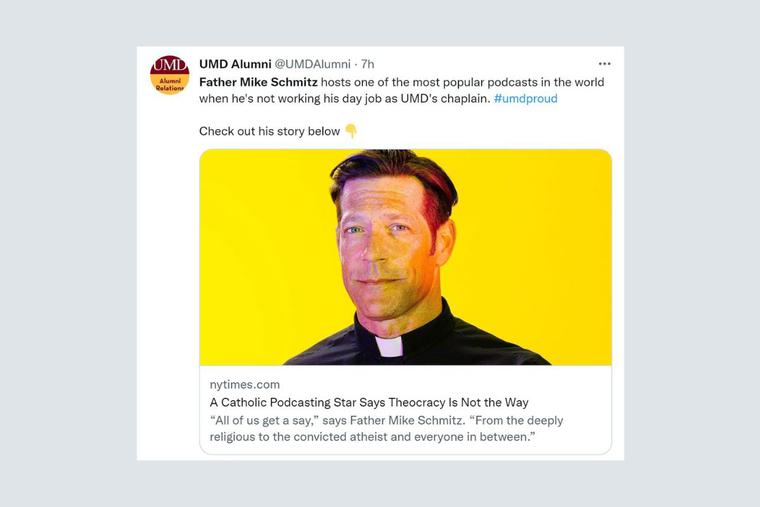 “If an overweight person comes to the ER with a gunshot wound, you’re not going to say, ‘OK, we need to get you on a diet and exercise,'” the celebrity podcaster Priest said. The New York Times Review. “It’s like, ‘No, you’re bleeding. Once this is taken care of, we will address the underlying health issues. ”

The Minnesota Catholic priest made his comments in an interview published Sunday, where he challenged the idea that “pro-life” only means “anti-abortion.” Instead, he said, it represents something more: supporting women and babies – before and after birth.

“In our diocese, there are several women’s care centers that, yes, are pro-life, that is, anti-abortion, but they all aim to offer options to women who are then in crisis of pregnancy. “, did he declare.

The Catholic Church is not only versus abortion but also for life, he said.

“People say things like you mentioned, ‘You only care about the birth of the baby. You don’t care what happens after birth,” Father Schmitz replied to writer and “Talk” columnist David Marchese. “Actually no.”

“There are all these services that the Church and the members of the Church provide to help take care of mothers and children,” the priest said.

Father Schmitz is no stranger to the question of life. Earlier this year, he addressed the 2022 March for Life in Washington, D.C. But he spends most of his time in Minnesota, where he is chaplain at the University of Minnesota-Duluth and director of pastoral care. youth for the Diocese of Duluth. Among his many projects, Father Schmitz is perhaps best known for his hugely popular podcast, “The Bible in a Year (with Father Mike Schmitz).”

Because of this, the magazine’s headline advertised him as a “Catholic Podcasting Star”.

Marchese asked the priest to address several burning issues and continued with the analogy of the gunshot wound saying, “I don’t quite understand why it’s not the mother’s life that needs urgent care. .”

“I wouldn’t argue with that,” Father Schmitz replied. “I agree that the person in the middle of this is in crisis. It’s real.”

He cited a local example.

“That’s one of the reasons why, at least in our city here in Duluth, we’ve had UMD graduate students start these women’s care centers,” he said, ” because they’re like, ‘I’m pro-life, and when I mean pro-life, I don’t just mean anti-abortion. I mean, let’s help moms. Let’s help their kids. Let’s help them through crisis so they can start not living in crisis mode.

Elsewhere in the interview, Father Schmitz responded to the argument that a woman has the right to an abortion because it’s her body.

Marchese asked Fr. Schmitz about his approach to engaging with people on more difficult teachings regarding issues such as abortion, homosexuality and same-sex civil marriage.

Father Schmitz said that above all, he listens.

“Someone might say, ‘I want to know why the church teaches this.’ Someone else might say, “I want to know if there is hope for me, because it’s part of my story. I hope I’m not just jumping into whatever answer makes the most sense to me. I want to know where the questions come from, what someone is really asking. Often some of these questions – not always – are embedded in other questions such as: Do I still matter? What does this mean for me and my life, me and my family?

He said he considers any conversation a win if it gets the message across that “God cares for you”.

In difficult situations where a woman might seek an abortion, or someone says they are attracted to members of the same sex, Schmitz emphasized the importance of the “Christian message.”

God’s unconditional love for each person, as they are, changes hearts, he said.

“If I say he can love me now, it’s not just a matter of feeling affection. It’s letting that love change me,” Fr. Schmitz said. “When I say that, I’m not saying those desires are gone or that I’m not pregnant anymore. What I’m saying is, OK, if God has my permission to love me the way I am right now, it means I don’t have to walk in shame It means I don’t walk alone.

He concluded, “When it comes to big issues, the question is always the same and the answer must be given: Does God have your permission to love you as you are right now? Yes or no?”