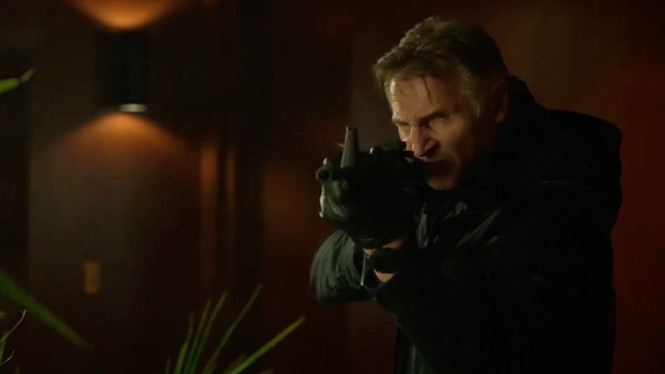 It’s understandable given where this story actually came from that it focuses on one side of its romantic triangle, but it seems like something is missing as the other two sides end up playing second fiddle. Based on the memoir of actor Sergey Fetisov, it features Tom Prior (who co-wrote the screenplay with director Peeter Rebane) as Sergey, who is nearing the end of his compulsory Soviet military service at an air base. Estonian in 1977. When Lt. Roman Medveyev (Oleg Zagorodnii) arrives, the two begin a romantic relationship – an illegal act that could threaten not only their careers, but their freedom. Luisa (Diana Pozharskaya), the base secretary and close friend of Sergey who falls in love with Roman, further complicates their relationship. Some of the best elements here involve his unwitting role as a beard after a KGB officer (Margus Prangel) begins to suspect Roman’s predilections. But the focus is still on Sergey’s journey, which involves his post-military enrollment in drama school, and a reunion between the two secret lovers. This is a classic star cross material –Romeo and Juliet gets a name check, in case it’s not clear – filled with furtive looks and sneaky hand touches, and of course, it’s a tragedy that this love is a crime. These particular characters, however, lack enough spark to carry the story whenever the woman who separates and connects them at the same time is out of place. Available April 29 at Broadway Center Cinemas. (NR)

Hatching ***1/2
To hell with “high horror” – like all interesting horror since the term was coined, it’s a way to uncover disturbing truths about the human experience, provided you pay attention. Director Hanna Bergholm and Ilja Rautsi tell us the story of Tinja (Jani Volanen), a Finnish teenager struggling with the high expectations of her lifestyle blogger mother (Siiri Solalinna). One night, Tinja discovers a strange egg in the woods and nurtures it until it hatches into… well, Something. The details of that something get weirder as the film progresses, in a way that slowly unfolds its central metaphor while still providing good old visceral horror satisfaction. It’s the story of wanting a mother who will love you even if you’re not perfect, and trying to manifest that in the world. It’s a story with a shrewd ability to find a portrayal of eating disorders with a kick of body horror, and the wisdom to realize that the surest way for a daughter to make her dad hurt enough comfortable leaving her alone is letting him think you’ve started your period. Tinja’s newborn character design is a terrific practical effects job, and there’s plenty of material that makes this a solid monster movie. And, like so many thoughtful horrors that preceded it, Hatching takes his time before specifying who is the real monster in its history is. Available April 29 at Broadway Center Cinemas. (NR)

Interior empire **1/2
“I don’t know what happened first…and it kinda pissed me off.” So Laura Dern’s Nikki/Susan/whoever emphatically distills David Lynch’s pattern of unreliable chronology, shifting identity, voyeurism, artifice and batshit symbolism in her 2006 feature, now in re-release. And while there’s stuff here – as there is with all Lynch movies to me – it’s quite indelible, I’m coming. Do not. You understand. This opaque, surreal vision somehow makes Lynch’s early films look like lofty conceptual presentations. Dividing the film cryptically between Hollywood actress Nikki (Dern) and her character Susan, Lynch navigates privileged aesthetic and thematic territory: Madonna/whore dualities; soliloquies full of tension; dry humor. As with most Lynch-directed projects, individual moments of sound design and shaken imagery can tingle every hair on your body. But these moments here span three hours – much of it shot in close-ups up to the nostril, and it’s all shot on consumer digital video from 15 years ago that looks like an ass from before -guard . Even if you don’t know what it all “means”, it certainly isn’t boring, not with Dern’s incredibly committed performance. However, that looks like a lot of work to do for a less powerful rotation. Mulholland Drive. Available April 29 at Broadway Center Cinemas. (R)

Marvelous and the Black Hole **1/2
There’s plenty of seriousness to writer/director Kate Tsang’s comedy-drama, but the seriousness isn’t always enough to give predictable plot dynamics a real emotional kick. Sammy (Miya Cech) is a teenage girl whose grief for her mother has turned into vandalism and anger. Forced by her father (Leonardo Nam) to attend a summer school, Sammy meets Margot (Rhea Pearlman), a child magician, and becomes an initially reluctant student. The dynamic is most reminiscent of The Karate Kid – a teenager in search of a replacement for an absent parental figure takes lessons from an older, lonely mentor, whose own family tragedy is tied to a grand historical event – ​​but this is not an inherent problem, given the way this dynamic can work. The bigger problem is that Tsang doesn’t guide Cech into a performance that truly chooses between rage and simple teenage petulance; it feels like a mistake to introduce slapstick comic elements and whimsical animated misfits if it’s genuine heartbreak. Pearlman and Cech have a few charming moments together, but on the way to the exact climactic scene you should be able to predict at around 15 minutes, the film never finds a deeper psychological hook than “well-meaning entertainment.” Available April 29 at Park City Film Series. (NR)

Memory **
Liam Neeson has spent a lot of time over the past 15 years playing barely distinguishable variations on his taciturn badass “very particular skill set”; this remake of a 2003 Belgian film tweaks the formula a bit, but in a way that blurs the narrative. Here he plays Alex Lewis, a professional assassin who tries to get out of the game when his worsening dementia affects his job. But he’s coerced into a job he doesn’t want—killing a teenage girl with information about a sex trafficking ring—and which brings him into conflict with FBI agent Vincent Serra (Guy Pearce). Ultimately, the narrative is as much about Serra as Lewis, and a few other characters, including a Mexican agent (Harold Torres) working with Serra, as well as the wealthy philanthropist (Monica Bellucci) facilitating a cover-up. Territory battles between the feds and local Texas cops continue to force the story to be about money manipulating the system, which isn’t exactly new ground for crime dramas. It works best when it’s actually character moments, whether it’s Serra’s growing sense of helplessness or Lewis trying to find redemption before losing his faculties completely. There’s more compelling material to watching people struggle with their weaknesses than in a standard shoot-’em-up. Available April 29 in theaters. (R)