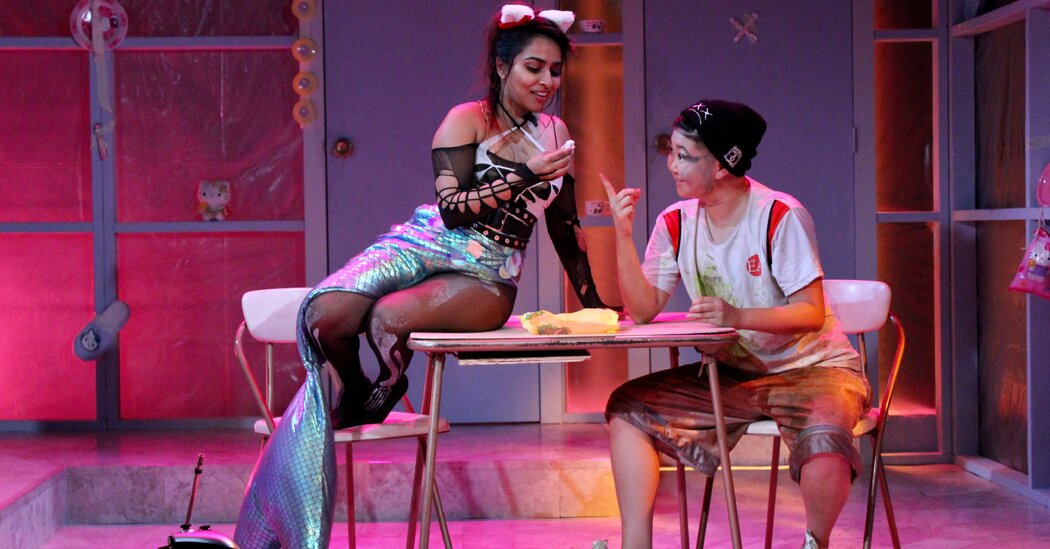 Urban real estate is full of ghosts. How many people have lived and died alone, in apartments stacked up to the clouds? Cities thrive on fantasies of possibility, but the specter of suffering looms behind every door. Just ask the broker pedaling a murder scene cleaned up on the lure of its fresh lemon scent.

The future tenant of this cramped “Happy Life” studio, which opened at New York’s Walkerspace on Tuesday night, says she’s used to the ghosts clinging to her shoulders. It’s a convenient match, as the two who haunt his new digs aren’t the type to bump into each other at night and call it a day. They bicker like spoiled children, reminisce about the circumstances of their terrible death, and make impossible demands of the living.

Playwright Kathy Ng imagines a world where the line between this one and the next is porous but sticky, and everyone on either side wants a second chance. It’s reasonable motivation to propel the characters forward, but “Happy Life” doesn’t chart a conventional course. Ng’s influences include gruesome true crime and manga pornography, so mortality, eroticism and Hello Kitty collide in a spirited, if sometimes muddled, contemplation of loneliness and loss.

The chief ghost in charge (or HGIC, as the acronym-prone Ng characters might call it) has been the victim of a brutal homicide. Ng borrows details from the 1999 murder of Fan Man-yee, a Hong Kong woman who was abducted and tortured by three men, in a case known as “Hello Kitty Murder. Billed as Cat Mermaid and performed with unbridled intensity by Priyanka Arya Krishnan, the HGIC has an iridescent tail that drapes down one leg and furry cat ears protruding from her tangle of hair (costumes are by Alicia J. Austin). Her claim to the site of her fatal ordeal is obvious, and she has every reason to be in a constant state of fury.

The other lingering soul (Sagan Chen) hung on the bathroom doorknob. His chest is bandaged from post-mortem surgery, performed by his ghost roommate – the wounds of a self-realization that only came about in death. Her hope lies in the potential reincarnation (or RO) options, which don’t look great, and the unlikely support of their deadly new roommate (Amy Chang), who has recently been divorced and is learning to live on her own.

There’s a playful quality to Ng’s storytelling that encourages light-hearted engagement and the suspension of rationality. Can a ghost operate a phone sex line? Can anyone see dead people if they really try? The rules that govern Ng’s theatrical plan are broad and unfettered, allowing for a freer association of impulses and ideas. A queer sensibility in both form and content is evident throughout. But “Happy Life” forgoes maintaining even its own internal logic, like when and why characters can communicate, whether they’re alive or dead.

The production, directed by Kat Yen for the hearth theater company, compounds rather than tempers Ng’s inclination toward maximal expression. The performances are each calibrated to a static frequency – the apparition powerful and ruthless, the new occupant relentlessly placid – reducing the potential for more dynamic character changes. The grayscale apartment, lined with plastic sheeting in place of drywall and designed by Lily Guerin, is perfectly neutral but still hopelessly drab, as much a proper crime scene as a blank slate for a fresh start.

“Happy Life” captures the details of the “Hello Kitty” murder with almost manic delight, recounting the grizzly details of the case more than once. It could make for some startling commentary on how women are infantilized, dehumanized, and ultimately consumed by a culture obsessed with sex and death. But there is an insular quality to the piece that resists wider resonance beyond its prescribed boundaries. The call comes from inside the studio, but who’s on the other end?

Gwyneth Paltrow mistook this skincare trend for a sex position

Formula 1 launches ‘Drive It Out’ campaign on abuse