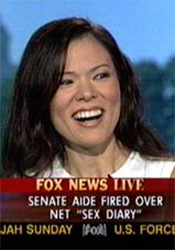 MAY 17 – A Capitol Hill staff member whose romance with a co-worker was detailed in the woman’s racy online diary has sued the blogger for invasion of privacy.

Robert Steinbuch, an attorney for Senator Michael DeWine, yesterday filed a federal lawsuit against Jessica Cutler, who chronicled their brief 2004 relationship in her blog “Washingtonienne.” It appears that Steinbuch, 37, was put off by Cutler’s recap of the duo’s sexual activities as well as his preference for spanking (among other things).

Although Cutler, pictured left, was posted under the pseudonym Washingtonienne, her identity became known when DeWine canned her for misusing Senate computers (and although she was only mentioned by initials “RS” on Cutler’s blog, Steinbuch’s identity was an open secret).

In his complaint – which does not specify monetary damages – Steinbuch notes that, “It is one thing to be manipulated and used by a lover, it is another to be cruelly exposed to the world.”

For her part, the 26-year-old Cutler has recovered fairly well from her layoff, landing a six-figure book deal and posing for Playboy. (21 pages)