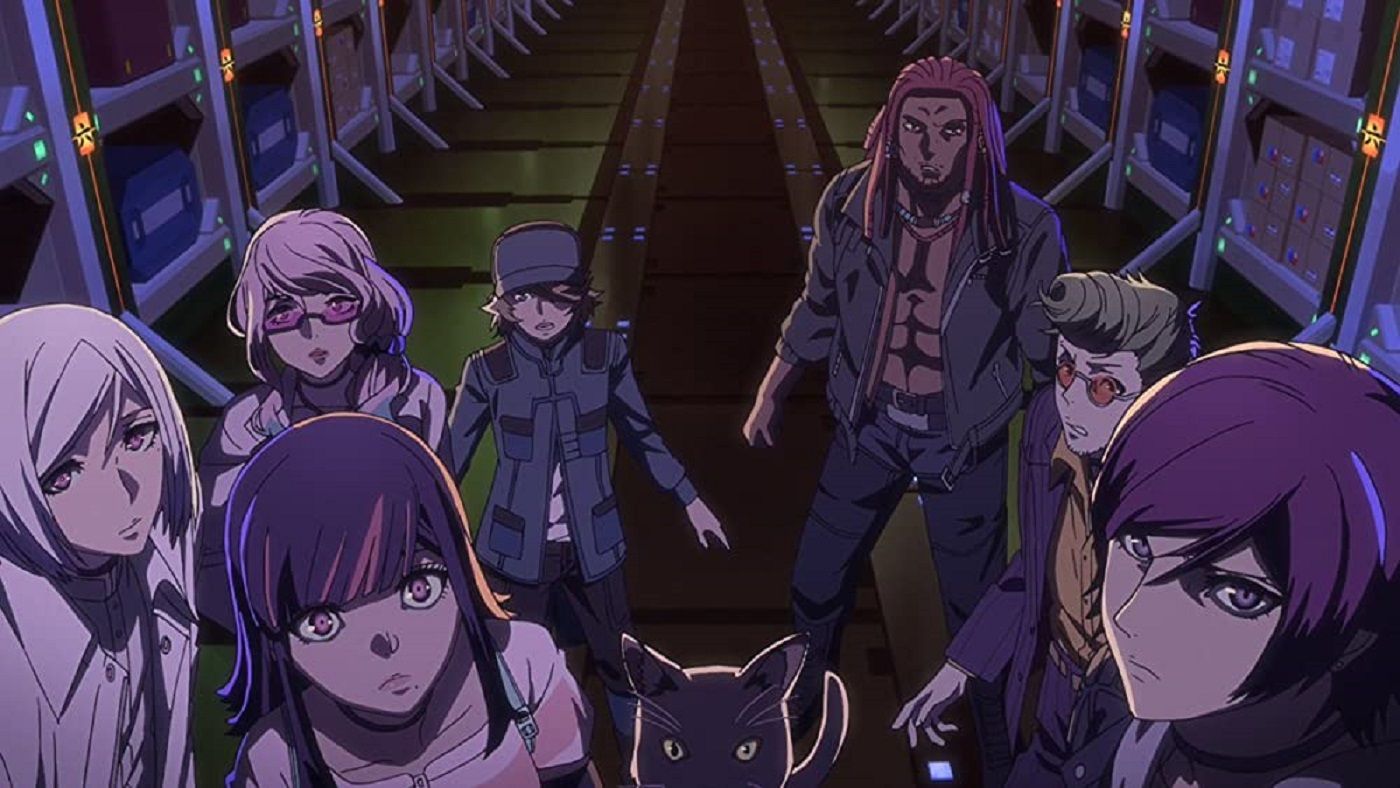 cyberpunk anime Akudama Drive marked the fall 2020 anime season with its eye-catching and vibrant aesthetic. It follows a young woman, officially referred to as “ordinary person”, as her life takes a tumultuous turn when she meets six wanted fugitives known as Akudama (“bad person” in Japanese). When the criminals threaten to assassinate her, she takes the alias “Swindler” and pretends to be another Akudama. She struggles to maintain her precarious lie as she meets the mysterious strangers. Don’t be fooled into thinking that this show is just an archetype of any other cyberpunk medium. Akudama Drive is a unique twist on violence and promiscuity wrapped in the guise of chaotic nervousness.

In the first half of the show, the characters’ personalities hilariously bounce around, creating an entertaining dynamic for the audience. But this anime isn’t a typical story about how the villains are more nuanced than people expect. In the second half, with no over-the-top missions and over-the-top visuals to distract the audience, the main characters show their true colors during their idle states. Cutthroat and Doctor are the most prominent examples of psychopaths whose inner selves are watered down somewhat at first. But after their mission is over, they’re explicitly portrayed as the villains they’ve always been.

The Akudama with the longest sentence (peaking at nearly 1,000 years) is Cutthroat, a psychopath who enjoys red objects and beheading people. During the mission, he gives off a cute “Harley Quinn” persona, his most notable traits being his infantilized demeanor and spontaneous crush on Swindler, whom he calls his “angel”. What’s particularly striking is how he establishes himself as a useful teammate, as seen when he agrees to help Brawler fight off the executioners because he wants to protect Swindler and “be useful”. His goosebumps are shown through him licking the blood off Swindler’s face, but the overall humor in scenes such as when he’s excited about flying in a shuttle and riding Courier’s bike involves that his psychopathy and his transgressions must be considered eccentric. When he and Swindler are paired up in Black Cat’s chosen group, he exclaims, “Yay!” and jumps up to her for a hug. When she pushes his face away and rejects the hug, it implies a passive side to him, leading him to appear less threatening, like a fly that can be pushed away. In Episode 4, as Hacker explains how he intends to hack into the gates of the Shinkansen, Cutthroat tells Swindler in a concurrent, quieter background conversation that he hopes he doesn’t die so he can kill her. , but she perceives this as a joke. This conversation is hard to hear, and likely goes unnoticed given Cutthroat’s playful demeanor.

Doctor is a stereotypical oversexualized character with no clear purpose in the first half of the series. His eccentric behavior and over-the-top ability to defy death is so absurd it’s fun. In Episode 2, the student slits her throat and cuts off her hand, but she is later seen with her neck sewn up and her hand reattached. When Hoodlum asks how she was able to survive, she nonchalantly states that “a little self-medication goes a long way”. The show also places considerable visual emphasis on its overly sexual design, potentially distracting viewers from its psychotic nature. In Episode 3, Swindler looks around the room, where the Akudama are sitting and talking casually, the Doctor smiling at a test tube, and Cutthroat laughing as he presses a red button he found. Looking at them, she remarks that “even though they are Akudama, they act pretty normal.”

In Episode 7, the story takes on a change in tone due to Brawler’s death and the Doctor selling out the team to the executioners. As the characters return to their post-mission lives, the show begins to feel truly dystopian. Hoodlum is offered drugs in a dingy alley to ease his depression, the Doctor ends up manipulating Hoodlum into degrading his worth, and Swindler has a run-in with human traffickers. At the end of episode 8, Cutthroat is shown limping with a bleeding leg, chasing Swindler, foreshadowing the end of his romanticized madness and the emergence of his true desires.

Cutthroat goes from annoying inconvenience to deadly threat when it is revealed that his attraction to Swindler stems from his desire to kill her. This explains the scene when he first meets her and gasps, seeming to notice something. From the start, he had imagined a red halo around his head that grew larger over time. He no longer continues driving by pressing red buttons and staring at glaring red lights. Episode 1’s ruthless Cutthroat who was notorious for beheading nearly 1,000 people becomes bloodthirsty at all costs with a “Here’s Johnny” moment with Swindler to boot (the episode title, “THE SHINING” , indicates that the scene is an intentional reference to the 1980 film). Even Swindler is surprised why he had always been protective of her, explaining that calling her an “angel” didn’t make sense as she originally thought. He sees all of his victims as “angels” with red halos, and Swindler is his “perfect angel”.

The Doctor engages in a relationship with Hoodlum, but the show doesn’t pull its punches when depicting their toxic and dysfunctional nature. In fact, Hoodlum doesn’t understand why she would want to sleep with him, to which she replies that she “is true to herself” by using her sexuality to manipulate others. Despite their implied intimacy, the Doctor stands aloof from him as she walks around the room, beginning a monologue about wanting to experiment on immortal children to fulfill her desire for complete control over life and the death. Meanwhile, Hoodlum, as always, trembles with fear. This scene doesn’t focus on the two of them as a “couple”, as its main purpose is to provide an intuitive analysis of the Doctor’s motives. Nothing is romantic, or even oddly romantic, about their meeting. Neither Hoodlum, nor any of the other characters, see Doctor’s sexuality as attractive, but instead see it as a source of their unhappiness. Hoodlum’s cowardice and naivety is what drives him to rely on the Doctor for help, ultimately resulting in his death when he betrays her, and they end up killing each other. Rather than having some kind of edgy romance, they are a tragic story of manipulation and betrayal.

The motive of the series is that the characters are likely to succumb to their urges and die there. Even Hacker and Courier, who help Swindler by sacrificing themselves for the children, ultimately cling to their urges (to find a fun challenge and to complete each job, respectively), which serve as secondary motivations for their actions. This anime gives the villains what they deserve and exactly what audiences deep down expect, but not before introducing the idea that they are parody and “normal” at the start, making their eventual death both discouraging. and predictable. These crazy, eccentric characters ultimately feel more realistic when not used for comic relief. They neither deviate too much nor too little from their first-half setup, being ‘true to themselves’ until the very end.

Monkeypox: what do the experts predict?