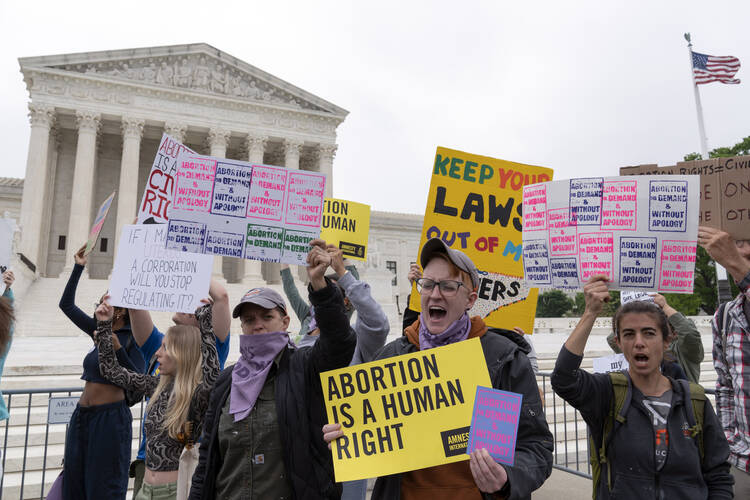 Editor’s Note: This article is part of The Conversation with America Media, offering diverse perspectives on important and contested issues in church life. Read more views on abortion and the annulment of Roe v. Wade, as well as media coverage of the subject, here.

I learned at a young age from a Pentecostal pastor that abortion is immoral. Growing up, I maintained this position, but it was not out of naivety. When I was 7 years old, my father left my mother alone in the struggle to raise four children. When I was 12, my 15-year-old sister became a mother herself. From elementary school and throughout high school, I knew children living in foster families. I understood then and I understand now that imperfect educations are far more numerous than perfect educations. Yet I did not believe that any circumstance, however flawed, made abortion ethical.

Over the next few years, I learned all I could about fetal development and later about how abortions were performed. I debated with anyone who would listen, seeking to change one more heart.

In my senior year of high school, when my government teacher asked us to pair up and choose a major societal crisis to solve, I knew immediately that I would be focusing on abortion. My partner and I studied abortion statistics and researched Margaret Sanger, Planned Parenthood, Pregnancy Crisis Centers, and post-abortion healing. Our article outlined three strategies to reduce abortions: comprehensive sex education, more generous welfare programs, and targeted support for mothers on college campuses.

I asked why mothers from the socio-economic elite so loudly demand the right to abortion when they are unlikely to have abortions themselves.

But I never considered banning the practice; after all, I thought at the time, no one wants to go back to hanger abortions in filthy basements. I began to think of myself as a pro-choice pragmatist who is personally pro-life. Over the years, I have become a strong proponent of abortion rights, going so far as to co-write an article titled “Women Against the World: The Conservatives’ Attack on Reproductive Rights” in 2011.

But in 2018, something changed. I became a mother, fiercely protective of the fetus growing inside me. I gave up cigarettes and wine, modified my yoga practice, and checked every can of herbal tea to make sure there was no licorice or papaya or anything else against which my sage -wife had warned me. The abortion debate got personal, and I became more quietly pro-choice. I wondered why the mothers of the socio-economic elite were so vocally demanding the right to abortion when they (statistically speaking) are unlikely to abort on their own. I learned how many poor colored women feel pressured to have abortions they don’t want.

There is a scientific consensus on the beginning of human life: 95% of biologists agree that it is at the time of fertilization. Whether or not a human embryo deserves legal protection is debatable; whether or not it is a living human being is no more debatable than the existence of climate change. But when it became clear that the Supreme Court would send Roe v. Wade in the way of Dred Scott vs. Sandfordthe pro-abortion lobby has come up with such alienating talking points that I’m finally ready to jump the pro-choice ship.

The fact that almost a quarter of women in the United States have had abortions is a sign that society has let us down.

I saw contempt expressed the idea of ​​a ban on abortion after 15 weeks. In two-thirds of the countries where abortion is legal, it’s illegal after the first trimester (with some exceptions, depending on the country), and this is not considered an inadmissible takeover of the female body. But I heard a pro-choice advocate on “1A”, an NPR podcast, say 15-week bans are cruel because women will no longer be able to choose abortion after routine screenings for genetic abnormalities. In other words, these laws would prevent the practice of a form of eugenics: the systematic use of abortion to deprive disabled people of their lives. And the laws are designed as an assault on women, as opposed to a form of protection for people society deems undesirable.

No one gets pregnant to experience an abortion. Women resort to abortion when they feel it is the best or only choice available, and a majority of women who have abortions in the United States are already mothers who need more support. This is why women living below the federal poverty level have abortions at a rate almost six times higher than women whose income is at least twice the poverty line.

In other words, in one of the richest countries ever, many mothers feel they can afford to give birth and raise only some of their children. Many politicians and pundits are now promising “abortion sanctuariesas if these places were a gift from God to women, whereas the fact that almost a quarter of women in the United States have had abortions is a sign that society has let us down.

We now live in a “shout your abortion” nation, and a crass message will never be adopted in more conservative parts of the United States, nor should it be.

I have always agreed that abortion should be legal under certain circumstances so that fewer poor women die tragic deaths. And I long hoped that before abortions were banned in any state, our nation would have more affordable housing, better prenatal care, comprehensive sex education, prison reform, higher minimum wage , safe places for children whose parents cannot take care of them – and less grated! We’re a long way from that point, but now, as I get text messages to join the pro-choice protests, I find I can’t stomach them.

Why? Because the half century since Roe v. Wade proved that abortions won’t end child poverty, reduce the gender wage gap, or free our culture from misogyny. Because the pro-choice message has shifted fromlegal, safe and rarerhetoric of my youth. We now live in ashout your abortion” nation, and a rude message will never be adopted in more conservative parts of the United States, and should not be.

I cannot in good conscience object to efforts to try something different. I am ready for abortion to become a matter of state. My prayer for states that outlaw the procedure entirely is that God may grant them the moral development necessary to do so with justice.

Guest Author Blog: “What does it mean to be a man if not power?” by Zabe Ellor – SciFiNow