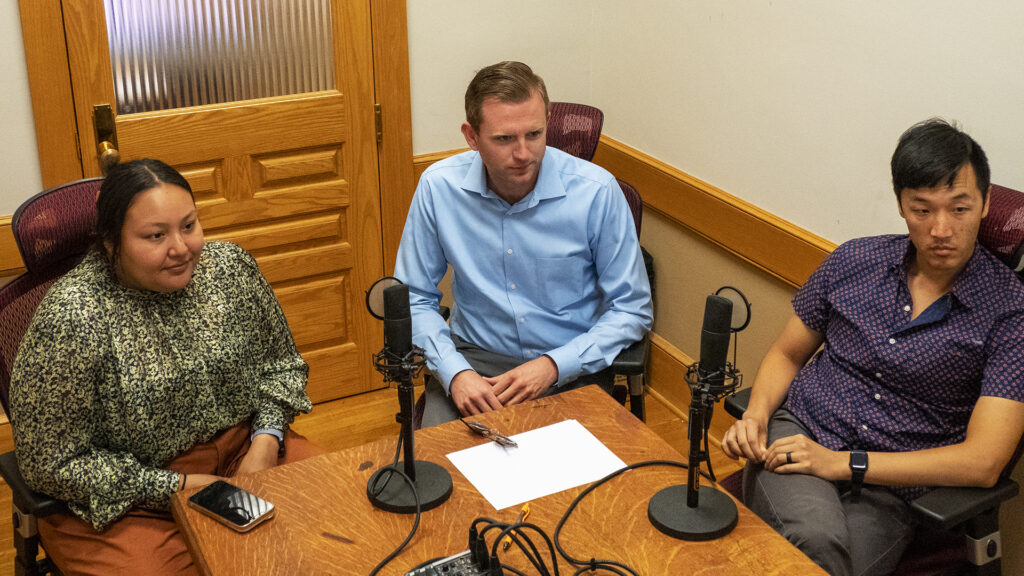 TOPEKA — Democratic Representative Rui Xu says regressive politics is the driving force behind the departure of young Kansans from the state.

Xu, of Westwood, joined two other House Democrats — Christina Haswood, of Lawrence, and Brandon Woodard, of Lenexa — in a Kansas Reflector podcast to discuss what it’s like to be a young Rep, running unopposed for re-election, and current political topics.

“What drives me crazy about being in the Kansas Legislature is the hypocrisy that we always hear where lawmakers are like, ‘Why are the young people leaving Kansas?’ And then we all say : ‘Regressive policy,’ then they ignore it, then continue their attack,” Xu said. “…So either stop pretending you care why young people are leaving Kansas, or listen to us and help us fix it.”

According a 2021 study conducted by United Van Lines, which tracks customer migrations across states, 55.5% of moves involving Kansas households were outbound, meaning those households moved to another state. Outbound statistics for the state of Kansas have fluctuated between 55% and about 60% since 2014. Kansas ranks 11th in number of outbound moves compared to other states and sixth when state populations are taken into account.

Many state politicians focus on Kansans, especially young people, who are leaving the state. During his bid for governor, Republican Attorney General Derek Schmidt said one of his main goals was to keep Kansans in Kansas.

Woodard said lawmakers have a responsibility to represent their districts, “but also to shine a light on the issues that our young people face every day.”

“I feel like our responsibility is to bring issues that are important to young people to the forefront,” Woodard said.

Some of these issues facing young Kansans, according to Woodard, Haswood and Xu, are affordable housing, education, anti-LGBT policies and abortion rights.

House Republicans running unopposed did not respond to requests to participate in a podcast.

Last month, Xu joined Governor Laura Kelly at a signing ceremony for House Bill 2237which aims to help balance the housing shortage in Kansas through a set of tax credits encouraging investment in residential housing, especially in rural areas.

“If you have older people who are struggling to stay in their homes due to rising house prices, or you have young people like us looking to buy a home that is priced out of the market , ideally in the long term, increasing housing supply will balance that out a bit,” Xu said.

More and more teachers leave the class. In April, there were 1,381 teaching vacancies in Kansas, according to the Kansas State Board of Education.

“When you have legislators talking about dictating the agenda or saying you can’t say certain things or ‘grooming the kids’ in quotes, of course you’re going to look at what my other options are,” Woodard said. .

He said questioning a teacher’s motives is “micromanagement” and an attempt to “make government so small that it can fit into the classroom and watch every move (of a teacher)”.

He said he was glad to see House Bill 2626 pass, which doubled the credits for the Kansas Teacher Service Scholarship. Those who receive the scholarship must teach for one year at Kansas and continue to teach each year they are a recipient.

Haswood said she tries to support educators. She said she often visits classrooms and has visited schools in her district, which includes parts of Lawrence and Baldwin City.

“You know, my district goes to Baldwin City, and when I went to visit those schools – and it’s a more rural setting than the Lawrence of an urban setting – I had a visit by the special education teacher , and he was telling me that special education is a bit of a smaller program, that they have to go to different schools,” she said.

“Certainly the policies that are being passed, the anti-trans, anti-LGBTQ+ policies, are really driving people away,” Haswood said. “Not only that as a human problem, but also as an economic problem – where so much hate and this rhetoric is really poisoning the state of Kansas.”

In 2015, Governor Sam Brownback rescinded Governor Kathleen Sebelius’ executive order prohibiting discrimination against LGBTQ state employees. Under Brownback’s overthrow, it was legal in Kansas for such employees to be fired or harassed on the job until 2019, when Kelly signed an executive order to restore protections.

Woodard said in 2018 that he and Rep. Susan Ruiz pushed to modernize the Kansas takes action against discrimination so that LGBTQ Kansans are protected. He said at the time that it was one of the bills with the most bipartisan co-sponsors of any bill in the legislative session.

Until a 2020 U.S. Supreme Court ruling, it was legal in the United States for private and public employers to fire workers because of their sexual orientation.

“Part (of Brownback’s executive order) was lightly resolved with employment discrimination at the Supreme Court level, but given the events of the past week, we can’t take anything for granted,” Woodard said.

“We have a Supreme Court justice saying marriage equality is the next step, or we have an outdated law on the book that criminalizes homosexuality,” Woodard said. “We need to modernize our Kansas statutes to make sure everyone is welcome here, not just to make sure they can work and live here and spend their hard-earned money here, but that we don’t criminalize their very existence. for who they are.

The UK holds its 245th annual hearing on July 4

Reviews | Advocates of forced births show how barbaric their position is