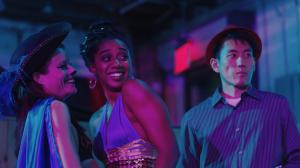 From left to right: Stephanie Sellars as “Veronica”, Makeda Declet as “Maya” and Jake Choi as “Daniel” meet at a polyamorous party in “Lust Life Love”, now available on VOD. 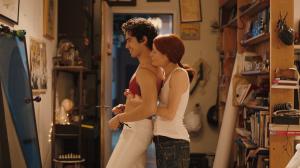 From left to right: Rolando Chusan as “Pedro” and Stephanie Sellars as “Veronica” having fun in “Lust Life Love”, now available on VOD.

With an emphasis on emotional connectivity as well as pleasures of the flesh, “Lust Life Love” explores lifestyle challenges between three people in New York City.

My goal was to make a film that authentically presents the polyamory and the ups and downs of a sexually adventurous lifestyle.

“Lust Life Love,” the directorial debut feature by co-directors Stephanie Sellars and Benjamin Feuer, is based on Sellars’ personal experiences with polyamorous relationships. Sellars, who stars as “Veronica”, also wrote and produced “Lust Life Love”. Manhattan-based filmmaker Sellars has been a columnist and contributor to New York’s LGBTQ + community since her first “Lust Life” column for the New York Press. Curious, frank and uninhibited, she reveals much more than the skin in her semi-autobiographical interpretation of “Lust Life Love”.

In “Lust Life Love,” Veronica Willow is a bisexual blogger in her 30s who writes about her polyamorous sex life in New York City. Independent, confident, sultry and free, Veronica seems to have it all: her girlfriend Joanne, her lover Pedro, an array of friends and scheming strangers she enjoys on sex parties. Then she meets Daniel, monogamous but unfortunately married. Seduced by the challenge, Veronica pursues him, and they dive into an affair. After Veronica’s other relationships end and Daniel’s divorce, she attempts to cultivate a triad relationship with him and his friend Maya, but an unexpected jealousy shifts her heart and identity. Will Veronica and Daniel’s relationship remain intact and can they both find out what they really need with each other?

“My goal was to make a film that authentically presents the polyamory and the ups and downs of a sexually adventurous lifestyle. Not only because I find this subject fascinating, but because I have never seen it portrayed in a narrative film in a specific, precise and honest way, ”said Sellars.

With an emphasis on emotional connectivity as well as pleasures of the flesh, the plot of “Lust Life Love” focuses on the challenges of the lifestyle between three people – bisexual, sex blogger Veronica (Sellars ), the hapless (monogamous) real estate agent, Daniel, played by Jake Choi (ABC’s Single Parents & American Housewife) and Free-spirited Maya, played by Makeda Declet (Awkwafina Is Nora from Queens, House of Payne, Being Mary Jane).

“From script to screen, our vision was to create a narrative of real moments through the talent and diversity of our cast, the raw energy of real sex party venues, and background performers from the positive sex community. Throughout the process, Stéphanie often revisited her experience to ensure that every moment was rooted in the truth, ”said Feuer, co-director.

With Sellars, the film was produced by Alena Svyatova and co-producers Sola Fasehun and Simon Taufique.


The priority of EIN Presswire is transparency of the source. We don’t allow opaque clients, and our editors try to be careful to eliminate bogus and misleading content. As a user, if you see anything that we missed, please bring it to our attention. Your help is welcome. EIN Presswire, Every’s Internet News Presswire ™, tries to define some of the limits that are reasonable in today’s world. Please see our editorial guidelines for more information.

Creation of Inspector General position recommended to DND, but lawyer says watchdog must be civilian