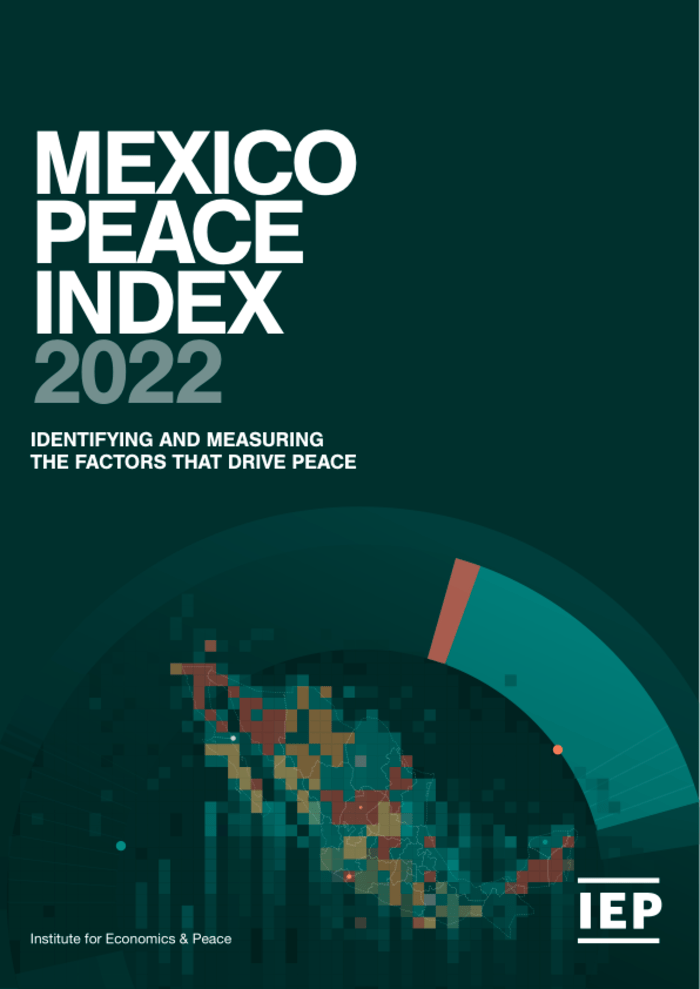 This is the ninth edition of the Mexico Peace Index (MPI), produced by the Institute for Economics & Peace (IEP).
It provides a comprehensive measure of peace in Mexico, including trends, analysis, and estimates of the economic impact of violence in the country. The MPI is based on the Global Peace Index, the primary global measure of global peace, produced by the IEP annually since 2007. The MPI consists of 12 sub-indicators grouped into five broader indicators.

In 2021, three of the five MPI indicators improved. Notably, gun crimes and homicides improved, with rates dropping 6.2 and 4.3 percent, respectively, and both reaching around 26 per 100,000 people. This is the second consecutive year of improvement for both indicators after strong increases between 2015 and 2018.

However, longer-term trends point to a marked deterioration in peace between 2015 and 2021. Peace in Mexico has deteriorated by 17.1%, with many crime indicators significantly higher than seven years ago. . The 2021 homicide rate was 76.3% higher than in 2015. While the homicide trend has improved over the past two years, Mexico’s homicide rate has remained near historically high levels in 2021, to 26.6 deaths per 100,000 people, or more than 34,000 victims. This equates to approximately 94 homicides per day.

Organized crime and violent crime indicators deteriorated to near pre-pandemic levels in 2021, after improving the previous year. Deteriorations in the organized crime indicator were driven by increases in the rates of extortion and retail drug crimes, which increased by 11 and 6.2 percent, respectively. In 2020, violent crime was one of the indicators hardest hit by restrictions on daily activities caused by the COVID-19 pandemic, with assault and robbery rates dropping sharply. The deterioration in violent crime in 2021 is likely associated with the lifting of public health measures and a return to pre-pandemic mobility levels. In addition, the deterioration in violent crime was also attributable to the continued increase in reports of domestic violence and sexual assault.

Recent violence in Mexico is linked to changes in the organized criminal landscape characterized by the rapid and violent territorial expansion of some large cartels, mainly the Jalisco New Generation Cartel (CJNG), the proliferation of small criminal groups and the diversification of the criminal activity. There have also been major changes in the type of drugs that Mexican criminal organizations transport internationally over the past decade, with marijuana trafficking dropping while fentanyl trafficking has risen sharply.

The states that saw the biggest deteriorations in their homicide rates, such as Baja California, Guanajuato, Michoacán and Zacatecas, were home to ongoing cartel conflicts. Gun violence tends to be more intense in these states where multiple criminal organizations compete for territory and major drug trafficking routes. Notably, deaths attributed to cartel disputes have risen from 669 in 2006 to over 16,000 in 2020.

The most significant improvements in tranquility in 2021 occurred in Colima, Chihuahua, Tabasco, San Luis Potosí and Sinaloa. On the other hand, Sonora, Zacatecas, Nuevo León, Morelos and Michoacán recorded the greatest deteriorations. Notably, these five states have witnessed an incursion of the CJNG in recent years.

The economic impact of violence improved for the second consecutive year in 2021, decreasing by 2.7% or 137 billion pesos compared to the previous year. In 2021, the decrease in crimes such as homicides, kidnappings and robberies supported the improvement in economic impact. Additionally, the Mexican government reduced spending on homeland security and the judiciary, by 8.5 and 3.3 percent respectively, which contributed to the lower overall impact. Conversely, military spending increased by 14.7% to almost 167 billion pesos, the highest level of spending ever recorded. The economic impact of sexual assault recorded the highest percentage deterioration of any indicator, increasing 16.9% from the previous year.

The IEP’s analysis reveals that Mexico needs to increase its spending on the criminal justice system to effectively address violence. Mexico’s spending on homeland security and the judicial system in 2021 was equal to 0.63% of GDP, the least of any country in Latin America or members of the Organization for Economic Co-operation and Development (OECD). In addition, spending on homeland security decreased by 37.2% between 2015 and 2021, after adjusting for inflation, while spending on the justice system decreased by 7.5% over the same period. .

For such funding to be effective, institutional corruption should also be tackled. In particular, the municipal police and the judiciary are considered the most corrupt institutions in the country, with more than 65% of Mexicans perceiving them as corrupt in 2021. An analysis of the link between police salaries, corruption and the Organized crime found that low police salaries play only a small role in Mexico’s high levels of violence. The violence in Mexico reflects a deeper level of corruption and administrative inefficiency, which affects judicial and political processes and facilitates the operations of criminal organizations.

Mexico’s socio-economic resilience, as measured by the Positive Peace Index (PPI), has deteriorated by 1.1% since 2009. This contrasts with an average global improvement of 2.4%. Positive peace is a measure of the attitudes, institutions and structures that create and maintain peaceful societies. At the national level, Mexico’s deterioration since 2009 has been driven by the deterioration of three pillars of positive peace: a well-functioning government, low levels of corruption, and good relations with neighbors. At the state level, high levels of corruption and poor governance are statistically linked to crime and violence.

Political responses to the COVID-19 pandemic have also had a significant impact on positive peace in Mexico. The healthy business environment pillar deteriorated by 2.1% between 2019 and 2020, reflecting business bankruptcies, unemployment and worker furloughs following public health measures and restraining orders home. Economic inequality has also increased, with the exclusion indicator by socio-economic group of the Acceptance of the rights of others pillar deteriorating by 2.6%.

Effective peacebuilding strategies will need to examine multiple dynamics and how they interact, and the Pillars of Positive Peace provide a systemic lens for analyzing the societal issues facing the country. Addressing corruption and inefficiency in business, government and institutions would not only reduce impunity and crime, but also free up funds and resources for much-needed investment. In addition, showcasing and replicating the successes of peace and resilience-building programs could lead Mexico in a virtuous circle towards higher levels of peace. The MPI 2022 report aims to inform a strategic discussion among policymakers, researchers, business leaders, and the general public, to help develop holistic peacebuilding solutions for Mexico.