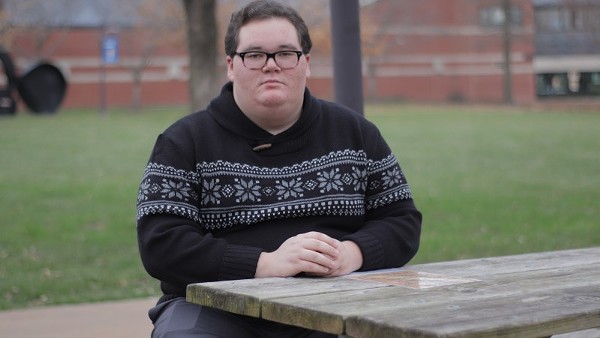 John Wallis looked at his return to his hometown to teach as an opportunity to provide a safe space he says was missing when he went to school. As he decorated his classroom at Neosho Junior High School, he hung up two signs above his white board that read “Everyone is Welcome Here” with the background having the progressive pride flag. On the bookshelf sat a rainbow flag.

That was enough to trigger a parent complaint, and ultimately, Wallis’ resignation.

In what Wallis tells the RFT, the flags and signs did not go against the school’s policy — he says he was advised against putting the decorations up, but not explicitly told to not hang the signs and flag. He says he never acknowledged the fact that he is gay to his students unless they personally asked him.

Instead, he told the kids that the room represented pieces of him — including a shrine to President Jimmy Carter to represent his fandom — and that the room was a safe space for students to come to him about any issues they may face. The signs were meant to show everyone was respected in his classroom, no matter what they believe. He said his first few days as a teacher were fantastic.

When he was called to a meeting with the principal after a great start to his year, Wallis was told a parent complained about the flag and signs, and said Wallis was going to “teach the kids to be gay.”

Wallis taught speech and debate, along with a theater and a world mythology class.

The conversation between the principal, assistant principal and Wallis was described as frustrating by Wallis. In those conversations, Wallis says the principal said that if they allowed him to have a pride flag, they had to allow other teachers to display Confederate flags.

“Which, first of all, they’re not at all the same thing,” Wallis adds. “One’s about me as a human, one is about you being a racist.”

He didn’t feel like the two administrators were receptive to what he was saying in his defense, and then he was instructed to take down the flag and signs. Despite the parent complaint, Wallis said he was told the meeting was “always going to happen.” He went to his classroom and did remove the decorations, but the removal not without notice from his students the next time classes were in session.

“Every hour I had at least one student ask, ‘Where are the signs? Where’s the flag?’ So, I answered honestly. I said ‘I had a meeting with the administration. I was asked to take it down.’ I then said, ‘If you thought that that flag had anything to do with this class, whichever class you’re in, that was a message that was misconstrued, I apologize,’” Wallis says. “And then I said, ‘But if you do have a problem with that flag representing me, you should find another class because I can’t change who I am.’”

This triggered three or four more parent complaints, Wallis said. He added that the parents called the superintendent, saying Wallis was “pushing an agenda.” Wallis was then asked to a meeting with the superintendent and building principal and asked to sign a letter addressed directly to him.

“Our classrooms cannot become a personal platform for pushing one’s personal agenda,” the letter obtained by RFT reads. “If you are unable to present the curriculum in a manner that keeps your personal agenda on sexuality out of your narrative and the classroom discussions, we will ultimately terminate your employment.”

The letter also said Wallis was not allowed to make additional references to “sexuality or gender” or have conversations about those topics. 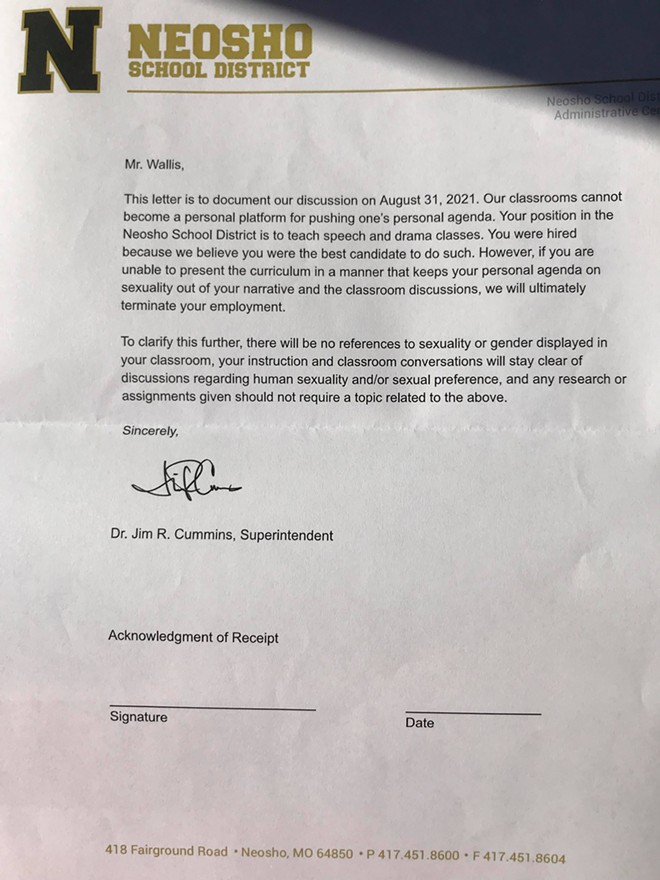 The letter was signed by Neosho School District’s superintendent Jim Cummins. Wallis was instructed to sign the letter and was given a copy to keep for himself. When asked by the RFT if he faced termination if he didn’t sign the letter, he says it was unclear.

“They didn’t explicitly say they were going to terminate me if I didn’t sign the letter,” Wallis says. “But, it was very clear that I was not leaving that room until I signed it.”

After he signed the letter, Wallis was left with a lot of questions: could he talk to students if they came to him about an issue with their sexuality? Would he be able to teach pieces of his curriculum now that he was barred from topics regarding human sexuality and gender identity?

He counted five students that were members of the LGBTQ+ community that approached him after his class to thank him for putting up the flag and signs, saying they wouldn’t know who to turn to if he didn’t have the decorations up. Would he be fired for comforting those students in times of need?

“I signed that letter because I felt forced to sign that letter,” Wallis says. “If any of those students wanted to have a conversation about that and someone heard me talking about it, I could have been fired because I was trying to help a student feel like they belong. That was just ridiculous to me.”

That was enough uncertainty, coupled with what he felt was now a hostile work environment due to the disagreements he had with the administrators, for him to turn in a resignation letter the next day on September 1.

On September 2, the two administrators came to Wallis in his classroom after his classes were finished for the day and told him he would not need to stay until his agreed-upon date of September 30; he was to pack his things and leave that day.

Wallis took to social media to share his experience, receiving support on Twitter from Missouri House Minority Leader Crystal Quade. He had nearly 200 comments on Facebook from members of the community supporting or disagreeing with him. One parent had commented he did not see how a flag and two signs “taught anyone to be gay” and that Wallis would be missed by his child.


.@MrJWallis, thank you for your dedication to our kids. I am ashamed this happened and continues to happen in our state. You- and our kids- deserve better. #MOleg needs to be on the right side of history. MONA must become law and we must start putting ALL of our kids first. https://t.co/3vEj0KPeWV

When reached for comment by the RFT, a spokesperson provided an emailed statement from the superintendent.

“As per all personnel matters, there is a limited amount of information that is allowed to be shared by the school district,” the statement read. “In regards to inquiries regarding Mr. John Wallis, I can share that Mr. Wallis was hired on 8/13/21, and he submitted his resignation on September 1, 2021.”

The superintendent then gave a link to the district’s personnel policies.

Wallis was able to say goodbye to four of his 100 students in the halls and some of his fellow teachers as he left with tears in his eyes and arms full of boxes with his belongings in them. When he got home, he filed a complaint with the Office of Civil Rights at the U.S. Department of Education.

This isn’t the first time Wallis has had problems in his hometown. In an RFT article, Wallis detailed how he was threatened by residents after organizing a Black Lives Matter protest.

Despite the problems he’s had, Wallis says he still loves Neosho and that he didn’t want people to think he hated his community. LGBTQ+ students and staff deserve to be supported, he says, and while the district is doing other great things, he thinks the way the school’s policy is worded excludes those students and staff members from being protected.

In a document on Neosho School District’s website, titled “Prohibition Against Discrimination, Harassment And Retaliation,” the policy reads that “the district strictly prohibits discrimination and harassment against employees, students or others on the basis of race, color, religion, sex, national origin, ancestry, disability, age, genetic information or any other characteristic protected by law.”

In his complaint, Wallis says the form the Office of Civil Rights asks you to fill out what you want to change from the complaint. He says he wants members of the LGBTQ+ community to be explicitly mentioned in the policy so they can feel protected and seen.

He also wants a written apology from the administrators — administrators that were there when he was a student — who he said wouldn’t listen to him and stood with “stone cold faces” as he cried saying goodbye to students and teachers.

“To me, that was one of the most heartbreaking things because I thought I knew them and I really didn’t,” Wallis says. “Because when it came down to it, they believed the bigotry of that parent more than they did the teacher that they hired, the person that they hired.”

The teacher will return to St. Louis later this month, where he says he’s meant to be. Wallis will be coaching new students in speech and debate, but worries about the students he’s left behind. To him, the district has sent a clear message about their lack of support for LGBTQ+ students and staff.

Wallis said he thinks it may be hard for future educators to take the risk and put up messages of support in their classroom after what happened to him. He says he wants the students — ones he had in class and those who he didn’t get a chance to meet — to know they’re not alone, they’re accepted and loved.

“My heart breaks for them. I think I’ve cried just about every day, you know, because I can’t imagine, I don’t know what the next teacher’s gonna be like,” Wallis says. “I can’t imagine that there’s gonna be any teacher who’s gonna be willing to be like, ‘Hey, I’m a safe place,’ you know, because if you say that now there’s a target on your back and I’m worried for the teachers, I’m worried for the students. But I do hope things get better.”