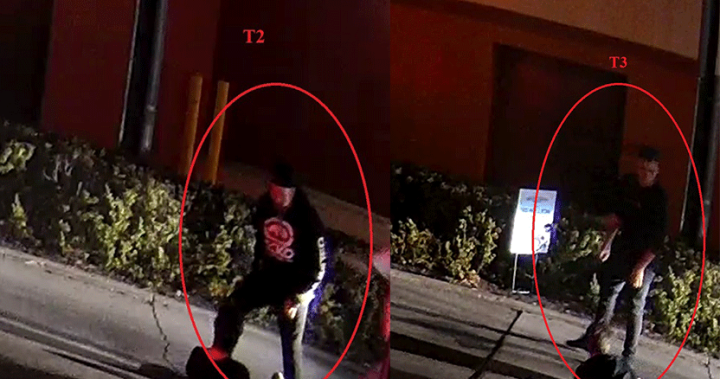 Two people have been arrested and police are looking for two more after multiple violent driving incidents in Edmonton earlier this month.

At around 3 a.m. on October 9, police were called to the 103rd Street and 80th Avenue neighborhood with a gun complaint.

According to a press release on Thursday, a group of men were standing at a drive-thru window of a restaurant ordering food when a Dodge Durango pulled up behind them. The driver of the SUV allegedly got out, approached the men with a gun before lowering the gun and firing a shot into the ground.

Three other suspects then got out of the SUV and approached the group.

“Two of the suspects then violently assaulted an 18-year-old man and a 22-year-old man, the two plaintiffs falling and hitting their heads on the ground,” the statement said.

The suspects continued to assault the two before returning to their vehicle and leaving the scene.

Both victims were treated by paramedics and transported to hospital with serious, non-life threatening injuries.

About 25 minutes later, police were called to a drive-through restaurant in the 96th Street and 165th Avenue area.

Police learned that a man driving an SUV approached the window and demanded a “large amount of food.”

“The suspect then verbally assaulted the clerk, before allegedly reaching and showing a gun inside the vehicle, while staring at the restaurant worker,” police said in the statement.

Using surveillance video, police were able to confirm that the same Durango was involved in both incidents. On October 10, police located the vehicle in the 178 Avenue and 103 Street NW area.

Officers executed a search warrant at the home and reportedly found a gun, ammunition and 110 grams of cocaine.

Isiaha Chermak, 24, of Edmonton (the alleged driver) and Darrious Ellis (one of the alleged passengers), have both been charged with aggravated assault and various firearms offenses.

Anyone with information on the other two people involved – or the driver and passenger of the silver Mazda in surveillance photos – is urged to call the police at 780-423-4567 or 377 from a cell phone. . Anonymous information can also be submitted to Crime Stoppers at 1-800-222-8477 or online.