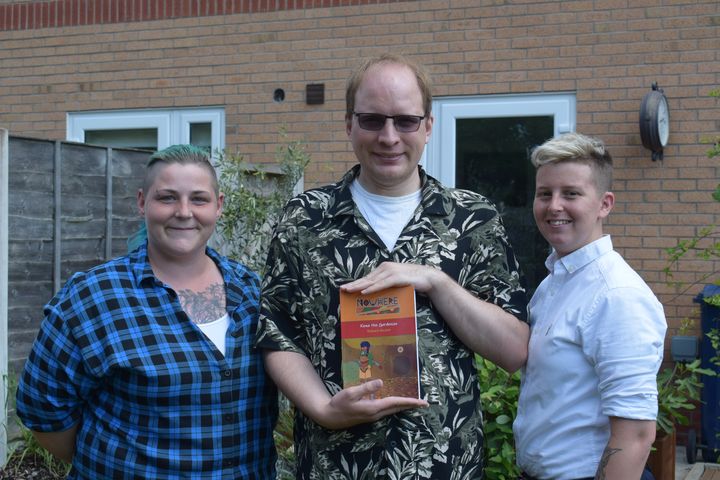 An autistic author from Preston has published a revised edition of a young adult book, with his own illustrations.

With support from the Autism Initiatives team at Braid Close in Penwortham, Richard Haslam’s quality of life was transformed as they worked alongside him to realize and realize his artistic vision for ‘Kiona the Gardenian’, which makes part of the “Now.Here” series.

‘Kiona the Gardenian’ is a young adult book that can be enjoyed by older children and teens, telling the story of heroine Kiona and her friends, following their adventures in the post-apocalyptic past. during an alternate 18th century.

Richard’s mother, Christine Haslam, said: ‘The move has done Richard a favor in so many ways as he has been given everything he needs to overcome his anxieties through his writing and to take up gardening, a new hobby which he adores.

“The team at Braid Close have been amazing and so supportive of Richard. I’m glad he’s now in a safe environment.

“They’ve really helped us as a family too, which we’re really grateful for.”

Richard published the pilot for the book during lockdown, but when his publisher closed he decided to find a new one in the form of Amazon Kindle, updating and re-publishing his book as a revised version.

Before the lockdown in March 2020, Richard was struggling and in a dark place. He had difficulty engaging with others and was closed off and nervous.

He struggled with death anxieties and was not motivated or supported to try new activities.

Richard had a poor diet and was starting to be swayed by the things he read online.

“The team worked with him to help him understand that everyone has a choice in what they do or believe. Now he writes about fighting labels.

“We all had an impact in our own way. Richard’s writing had different themes and required input from others.

“I was the writer throughout the process, but Richard would approach us at times on issues.

“The staff here go beyond their expectations on a daily basis. Richard’s progress is phenomenal. He’s like a new person now.

Read more: New guidelines for The Harris to empower the local community

The lockdown could have added to those concerns, but Richard’s family contacted Autism Initiatives through Lancashire Council and received support to help him move to Braid Close.

When Richard shared his goal of updating and re-editing the revised version of his book with the team at Braid Close, they helped Richard edit his writing and refine his illustrations from the first pilot edition.

They helped him develop his understanding of topics like the afterlife, religion, and same-sex marriage.

They also helped ensure that the writing was socially valid and not regurgitated or masked language.

Nikita, a support worker at Braid Close, enjoyed every moment of the experience.

She said: “Working with Richard has been brilliant. There is no limit to his creativity. He always considers the readers and how they will feel when reading his writings.

“He wants the best for his readers. I learned things from him, like how to use his illustration software. It’s always so positive to work with Richard.

Since lockdown, Richard has written six stories intended to be six separate books.

After the publisher closed and with the number of pages of Amazon Kindle, he decided to merge the first story with the almost finished second.

The final four stories will become the next two installments in this ongoing series.

Read more: A major art installation in Preston urges people to be the change they want to see

Richard’s father, Martin Haslam, said: “Richard is a happy soul now. He is talented and knowledgeable, and what he has accomplished with his book, his drive and his “get up and go” attitude is truly amazing.

“He is a credit to the Braid Close team and behind-the-scenes decision-makers like Lancashire Council.

“We are so happy that something positive came out of something negative. There are plenty of unsung heroes who do a great job.

“It was amazing for us to see what he accomplished with the right support!”

Read more: The talented illustrator from Preston is about to launch an online store

Preston is known as the birthplace of Nick Park, creator of Wallace and Gromit, and now a new creative face is being added to the town.

‘Kiona the Gardenian’ is inspired by places Richard has visited, such as the town of Shenandoah in the book, inspired by Anglezarke and Formby.

To buy the book, visit – https://www.amazon.co.uk/Kiona-Gardenian

Are you living life in your best interest?