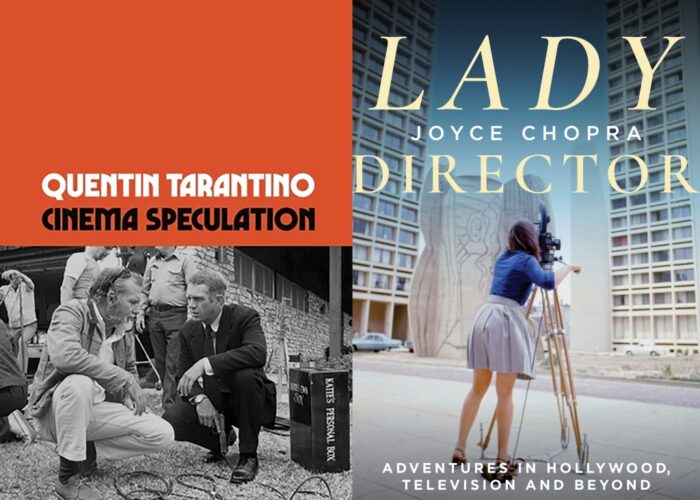 Review: Quentin Tarantino, Joyce Chopra each offer a director’s cut on life in the cinema

Moviegoers come in all shapes and sizes. You could be an obsessive cataloger of 1970s genre films or a pioneer of glass ceilings. The love of cinema is the love of cinema.

Two filmmakers have written new books that reflect their passion for the moving image. Quentin Tarantino’s “Cinema Speculation” is a dogged, compulsively readable appreciation of the grimy and generally grim films of his 70s youth. Joyce Chopra’s “Lady Director: Adventures in Hollywood, Television and Beyond” is a memoir written by a filmmaker who destroyed the Hollywood Boys’ Club, only to feel the sting of his chauvinism and hostility. Both books speak of a certain tenacity, of a need to watch, to do and to learn.

Tarantino cut his teeth going to adult movies as a kid in Los Angeles, usually with his mom and stepdad. He learned to pick up on what adult audiences responded to and respond accordingly. And he developed an early appreciation for transgressive cinema: “Joe” (1970), the cult classic starring Peter Boyle as a hilariously hideous mutation of Nixon’s Silent Majority; “Dirty Harry” (1971), the San Francisco rogue crime film that brought Clint Eastwood to a new level of stardom; “Sisters” (1972), Brian DePalma’s thriller about a little reporter who witnesses a gruesome murder.

To his credit, Tarantino, whose own movies (“Pulp Fiction,” “Inglourious Basterds”) lean toward the gleefully sordid, doesn’t just gush about these films. He offers his own very subjective reviews – he’s not Paul Newman’s biggest fan – and, in the best chapters, he even does some reporting. For example, his chapter on the 1972 Steve McQueen/Ali MacGraw action film “The Getaway” benefits greatly from his conversations with screenwriter (and future director) Walter Hill, who actually points out some of the issues he has with the film.

It’s easy to imagine an alternate, poorer universe in which Tarantino is a film critic rather than a two-time Oscar-winning filmmaker. Here he devotes an appreciative chapter to Los Angeles Times critic Kevin Thomas, a writer known for his aversion to snobbery (he was an early advocate for the late Jonathan Demme when Demme was making exploitative footage for Roger Corman). Tarantino knows what he likes and he engages the reader with ease. “Cinema Speculation” is, at a minimum, great fun.

Like Tarantino, Joyce Chopra, who belongs to a previous generation, never went to film school. But his reasons were different. “There were no film schools that I know of,” she writes, “and, more problematically, I couldn’t imagine myself in the role of director since I had never seen a film made by a woman.” Nonetheless, she persisted, debuting in documentaries with the great direct-movie machine Robert Drew of the 1960s. As she writes of herself and her female colleagues, “The running joke was that we had been hired so the guys “could see our pretty little asses hanging over the barrel of topping” as we bent down to retrieve the shorts that had accidentally been thrown to the bottom by the editors.

Chopra stuck with her and eventually directed her own underseen classic, 1985’s “Smooth Talk,” featuring teenage Laura Dern. Then she was appointed to direct Michael J. Fox’s vehicle “Bright Lights, Big City” (1988), a project whose producer, Sydney Pollack, managed to have her unceremoniously removed. A media dogpile followed.

“It appeared that my dismissal was not only good copy, it also served as a warning to other women,” she wrote. “Ladies, beware! Trespassing into our male-only enclosure could prove fatal to your health.

Now 86, she has continued to work in film and television, including her own television adaptation of Joyce Carol Oates’ Marilyn Monroe novel, “Blonde,” in 2001. Chopra’s efforts paved the way to personalities like Jane Campion, Sarah Polley, Ava DuVernay and others. It has never been easy. But love rarely is.

The Latin Right on Catholic GRN Driving Time: Does the Synod Hear You?