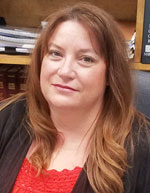 Roberts-Connick, 47, has worked in the Lincoln County Attorney’s Office since 2000. She was Deputy County Attorney from 2000-2012, with experience in the Child Support Enforcement and Criminal Divisions. . She became the county deputy chief prosecutor on April 1, 2012.

In this capacity, she has represented the State of Nebraska in criminal, juvenile and mental health proceedings, while having responsibility for supervising and training staff. She was recently the lead prosecutor in the Keith Allen murder case.

Since 2017, Roberts-Connick has been a member of the Nebraska Attorney General’s Office Human Trafficking Task Force as head of the Western Region, which is made up of 27 counties in Western Nebraska. She was a member of the Lincoln County Coordinated Domestic Violence Response Team, its Sexual Assault Response Team and its Human Trafficking Task Force.