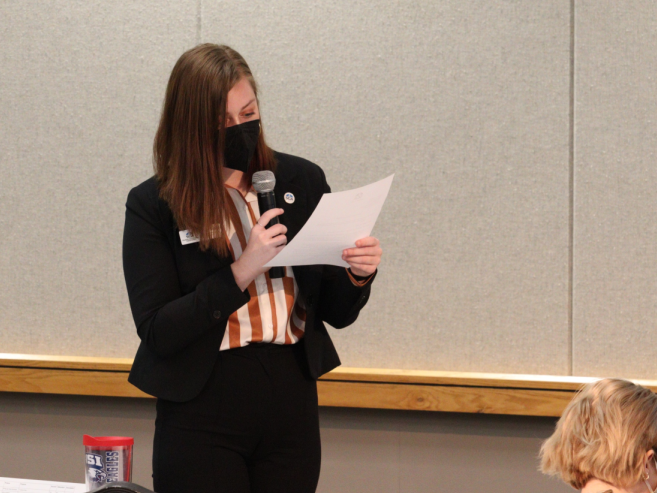 The Student Government Association has established an Administrative Vice President (AVP) position and committee for Equity, Diversity, and Inclusion for the 2022-2023 academic year. Anna Ardelean, president of SGA, signed the resolution for the position and the committee on March 25.

As a senior graduate, Ardelean said SGA had been anticipating this move for a long time, and now that they have officially passed it, it will be the start of the push for more inclusiveness on campus.

The position of AVP was created so that one person could represent the committee as a whole, which will be made up of people of various ethnicities, sexual orientations and religious affiliations, Ardelean said.

The official discussion on this position began on February 17, the resolution was presented on February 24 and adopted on March 3.

“Diversity manifests itself in so many different ways,” Ardelean said. The SGA wishes to use the new position and the new EDI committee to best represent all the various forms of diversity on campus.

The person in this position will assist the committee in advocating for diversity representation within the AMS. All students are eligible to apply for AVP positions.

Ardelean said, “Who is the person in the position is not as important as who is on the committee.” She said SGA wants to make sure they’re not just pushing for diversity, but actually making progress.

Ardelean said, “If we have an all-white General Assembly, you don’t want an all-white equity, diversity and inclusion committee.”

D’Angelo Taylor, associate director of the Multicultural Center, said he was delighted to see SGA pass the position and the EDI committee. “Having students engaged early on and illuminating diversity, equity, and inclusion on campus is pretty cool,” he said.

He said he wants the university to not only continue to promote diversity, but to continue the conversations and actions to drive more change.

Students on campus also hope that SGA’s decision to pass on the position and the EDI committee will create more opportunities to educate people about diversity.

Pricela Smith, a first-year psychology student, said, “We all just want to feel comfortable being ourselves, so if we educate our students, hopefully they can understand that we’re all humans.

Kierra Graham, a young art student, said, “You usually have uncomfortable conversations because you have people who haven’t been exposed to other people with different ideas, different cultures.”

The students also hope to spark more conversations and actions around diversity.

“I feel like if people were more educated they would understand that it’s okay to love who you want to love and identify with who you want to be,” Smith said. “I’m also glad our campus has diversity groups for people of color, but I feel like those minorities need to be better educated about racism.”

Ardelean said, “I can’t say that creating this position will automatically build all those bridges, but it’s a step towards that.”

Life after lockdown: Here’s how the pandemic has shaped the lives of young people