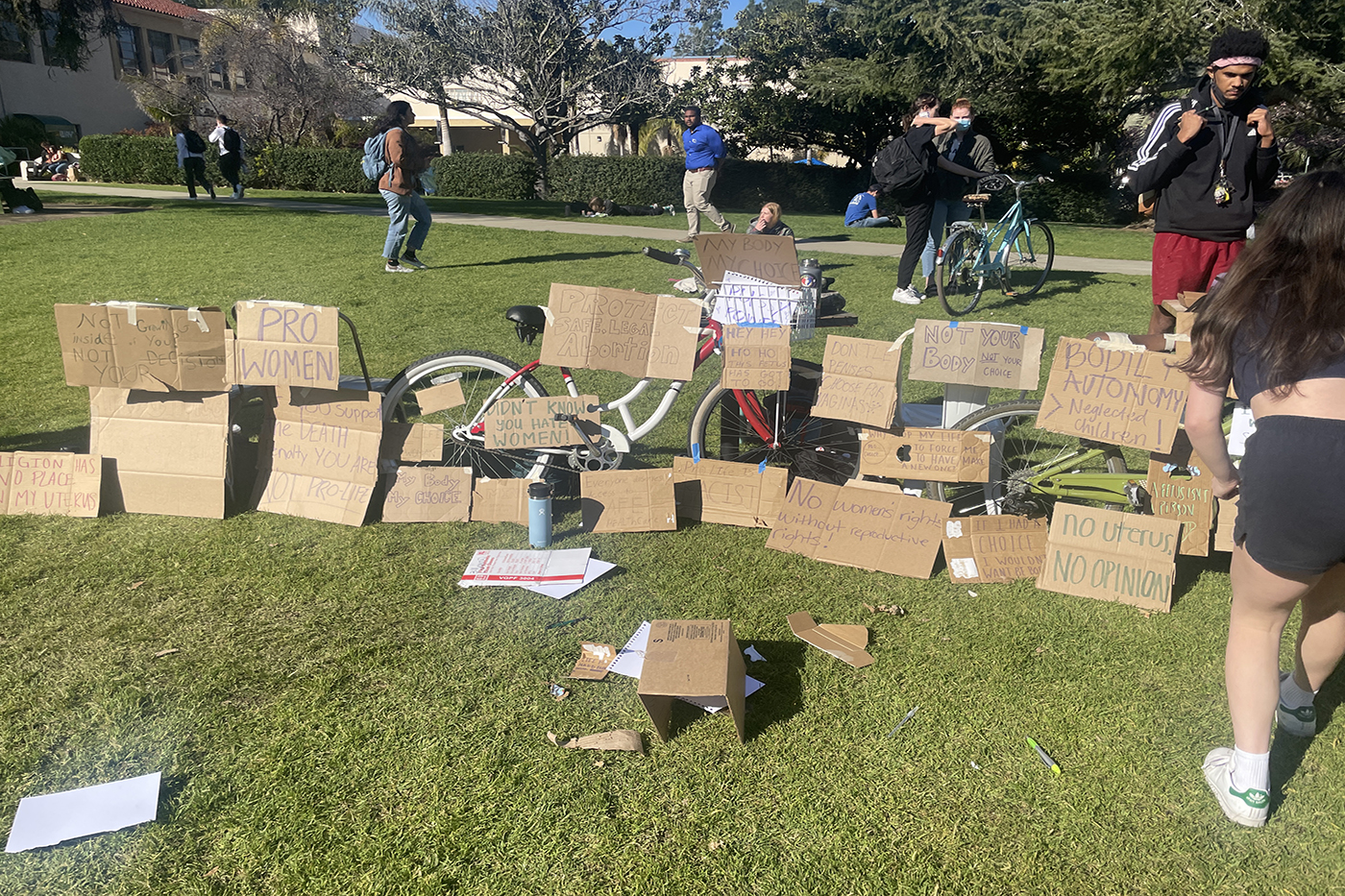 The demonstration caught the attention of passers-by and eventually a group of students formed to counter-protest the posting.

“Earlier today I saw these people advocating for pro-life, which in my understanding is a classist, racist and misogynistic thing to stand up for,” Kilborn said.

Kilborn returned around 12:30 p.m., set up a bicycle and tables in front of the protest, and began inviting students onto the lawn to join the counter-protest, making signs out of cardboard and markers. By 2 p.m., Kilborn’s bike was covered in panels.

“Earlier I walked by and threw condoms away to promote safer sex rather than what they do, what I think, in my opinion and statistically provenis something that leads to many dangerous medical emergencies,” Kilborn said.

As the demonstration continued, other students joined Kilborn on Dexter Lawn across from the Students for Life of America booth.

“I saw pictures on my friends’ stories and stuff, so I came to help,” said materials engineering junior Kat Meany.

Meany and fellow materials engineering junior Roxy Jackson-Gain made signs that read, “Not your womb. Not your choice”, “I didn’t know you hated women” and “Religion has no place in my womb”.

Jackson-Gain said she noticed a large number of students who said they were “clearly upset” about the pro-life protest.

“There was a girl who came and took the two purple signs and walked around with them for a while as they followed her,” Jackson-Gain said.

As the protests continued, upset students began stepping on them, pulling the red crosses from the ground and throwing them across the grounds, according to Nevada and Northern California regional coordinator for Students for Life of America, Lea Kalinowski, who was leading the pro-life protest.

Kilborn said they wanted to clarify that the counter-protest movement — making the cardboard signs in front of Students for Life of America — weren’t the same people who started taking down the signs.

“We’re just trying to make it visible, that on this campus, we’re not going to let these things happen without other opinions happening as well,” Kilborn said.

Students walking past the pro-life demonstration expressed concern that the display could elicit violent reactions from some passers-by.

“It seems like every time I walk past it’s really crowded, and it just got a little bit negative,” said sophomore Corinne Maxfield, a liberal studies student, “If the wrong person saw it, it could get violent, which was also a safety issue.”

Maxfield also said she was concerned that the cross-posting message could be harmful to some students who had abortions.

“It makes me feel unsafe because if I had to have an abortion, I wouldn’t feel safe on this campus and that’s a very personal decision,” Maxfield said. “Just the fact that women who have had abortions have to go through this when it’s a very difficult decision they would have to make – it’s just very upsetting.”

Kalinowski said Student Lives of America is not protesting to “shame women” and that their goals are to “raise awareness about abortion, resources other than Planned Parenthood, and life-affirming resources.” .

“We are here to care about women and children,” Kalinowski said.

Whatever the purpose of the protest, the students said they believed it would inevitably lead to conflict.

“It’s creating a lot more division on campus than it needs to, which is not what we’re looking for at all,” said sophomore Liberal Studies student Julia McEachen.

Movie Review: DRIVE MY CAR (2021): A powerful film about learning to let go of the past