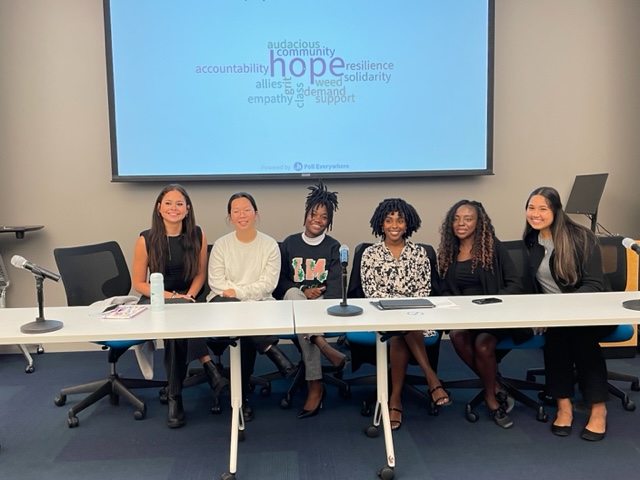 The Need for Title IX in STEM

In recognition of the 50th anniversary of Title IX, which sought to outlaw gender discrimination in education, a panel of Duke women met on Thursday, September 29 to discuss whether Title IX could change STEM ( Science Technology, Engineering and Math). Unfortunately, the answer was not simple.

But just through sharing the statistics relevant to this problem, the stories and their solutions, one could begin to understand the depth of this problem. One of the takeaways was that all women in STEM, whether students, teachers or principals, have faced gender discrimination.

Sherryl Broverman, Duke Professor of Practical Biology and Global Health, provided an overview to the audience. Of all of Duke’s ranked and tenured faculty, only 30% are women. On the other hand, women represent 60% of non-tenured professors. Broverman said men (white men in particular) are promoted at Duke with a higher frequency. This is especially seen with the title of assistant professor because, on average, men are assistant professors for 4 to 5 years; while women are assistant teachers up to age 9.

To give an example, Nasya Bernard-Lucien senior, a student panelist who studied biomedical engineering and then neuroscience, informed me that she has had a total of two female professors in her entire STEM career. It’s a common pattern here at Duke, as taking a STEM class with a female professor is as rare as finding an unstressed Duke student.

The start of a girl’s career in STEM

This disproportionate demographic of female STEM faculty is not a new phenomenon with Duke or the rest of the world, as the disproportion of females in STEM can be seen as early as middle school. Two of the student panelists noted that during their college careers they had not been chosen to join a specialized STEM program and had to push their school administration when they asked to take more STEM courses. advances.

Kisha Daniels, assistant professor of educational practice, told a faculty panel that one of her daughters was asked by her male peers, “what are you doing here?” when she took her college’s specialized math course. Gender discrimination in STEM begins in early childhood and extends its reach as long as women continue to be in a STEM field, and this is especially evident here at Duke.

Women in STEM at Duke

The last panel of Title IX @ 50 event was the student panel consisting of undergraduate and graduate students. Although they all came from different backgrounds, all acknowledged the gender disparity within STEM classrooms.

Student Bentley Choi said she was introduced to this experience of gender discrimination when she first came to Duke from South Korea. She noted how uncomfortable she was and how difficult it was to ask for help when she was one of the few women in her physics class. One would have hoped that Duke would provide him with a more welcoming environment, but that is not the case, and this is not an isolated incident either. Across the panel, all of the women felt uncomfortable in their STEM classes because they were one of the few girls in attendance.

The Future of Title IX

How can Title IX change these problems? Right now, Title IX and STEM aren’t as connected as they should be; in fact, Title IX, in the past, has been used to attack programs created to address gender disparity in STEM. So, before Title IX can change STEM, it must change itself.

Title IX should indicate that this issue is a systemic issue and not a stand-alone event. However, for this change to happen, Whitney McCoy, a research scientist in child and family policy, said it perfectly, “we need people from all walks of life to express the same opinion in order to create change. of politics”.

So talk to your peers about this issue because the more people who understand this situation, the greater the chances of creating change. The last thing that needs to happen is that 50 years from now there will be similar panels like this talking about this very issue, and there is no panel talking about how we, in the present, we solved it.

Message from Jakaiyah Franklin, Class of 2025