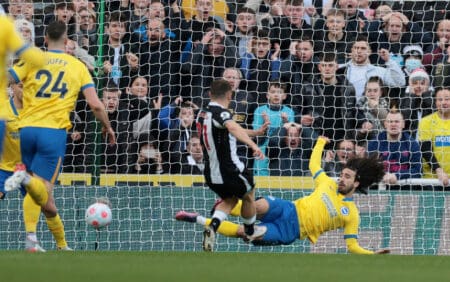 Eddie Howe has promised Newcastle will finish this season strong after the season safety target was met last night. There are still two games left on the schedule with Arsenal next on the agenda.

The Gunners travel to an electric park in St. James on Monday night. Their mood could very much depend on how the North London Derby goes tonight. A victory and they will have won a place in the Champions League.

Newcastle are coming off of two defeats against title challengers Liverpool and Manchester City. Howe received a boost with Kieran Trippier and Callum Wilson back in cameo roles at the Etihad.

The duo looked sharp and could play a major role in how this season ends. Newcastle’s next challenge is to eclipse last season’s total of 45 points. A victory on Monday will suffice.

Howe was asked about his star duo at this morning’s press conference. Here is his response:

“Both players would say they are very keen to start but my job is to make sure I do what is best for the team.

“We have to make sure they are fit enough to last a long time in the game. We will make a decision based on the training week.

Newcastle enjoy a few extra days of training with the game coming up early next week. Hopefully Kieran and Callum come out of practice unscathed and can start the game.

Unfortunately, while two stars return, a few key players have been lost for the rest of the season. Joe Willock and Jonjo Shelvey have been ruled out for the last two games due to injury.

Howe explained their two situations this morning while confirming that they will be back in time for pre-season:

“Jonjo has a pretty serious calf injury, which is similar to the one he suffered at the start of the season.

“He will be out for a while, but we expect him to return for pre-season without a problem.

“Joe has had a tendon problem in his knee for a while. We thought we had solved the problem but it came back.

“He needs a rest period, he’s had a few injections, but we expect him to be fine for pre-season.”

A place in the starting XI has been opened up to local boy Sean Longstaff. The 24-year-old started at Manchester City but struggled to break into Howe’s side this year.

There was talk yesterday that Longstaff is reluctant to sign a new contract due to his lack of playing time. However, Howe was asked about Longstaff and he expressed confidence that a deal will be done saying:

“I’m waiting for a positive resolution from Sean. Fingers crossed it’s very close to being done. I don’t check this day by day, but I’m hopeful.

Finally, there’s a positive update on Ryan Fraser, who has been out of action for over a month. The winger has returned to training and is expected to be in contention for Monday. Howe provided the following on Ryan’s return from his hamstring injury:

Engage in co-governance – without debate.