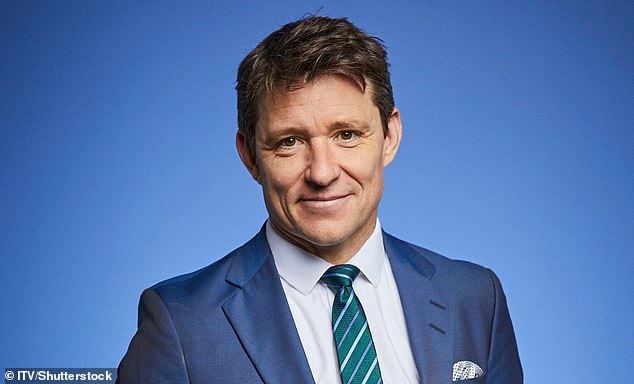 By Vicki Power for the Daily Mail

Ben Shephard, 47, shot to fame as a GMTV presenter and has been on Good Morning Britain since its launch in 2014. He also presents ITV shows Tipping Point and Ninja Warrior UK. Ben lives in south-west London with his wife, Annie, and their sons Sam, 17, and Jack, 15.

I’m generally a fairly optimistic person. Sure, there were times when things went wrong, but that’s where positivity helps.

After college, I fell into the television industry, which is full of opportunities and potential, but also has a brutal downside: you can lose your job quickly.

Ben Shephard, 47 (pictured), says to be positive if things aren’t going well He rose to fame as a presenter on GMTV and has been on Good Morning Britain since its launch in 2014

Early in my career I got a job running T4 on Channel 4. I expected to be there for a long time but after a few months one of the bosses fired me. She said: “It doesn’t work and I don’t think it will ever work. I don’t think you’re right about that.

I remember how emotionally difficult it was because I wanted this to be my career so badly. But I stayed positive because I believed I could get better. I got a few other TV jobs and in 2002 my showreel was sent to an editor at GMTV, but he said, “No, that’s crap.”

I wore T-shirts and jeans in them. Fortunately, a producer had the idea to make me wear a costume instead. It worked, and 48 hours later the same editor said, “Yeah, that’s him we want.”

It started me down the path to Good Morning Britain and the other shows I do now. My social media settings are set to block anyone posting negative comments as I don’t want to focus on that.

When I went to Sky Sports in 2010 we had a post-show analysis and I asked the team to start with the right things.

But I was also guilty of negative talk. I used to say to my kids, ‘Yeah, that was great, but the problem was…’ One day I heard one of my boys say the same thing and I realized the negative impact of my words. Now, we always start with the positives.

That’s why I wrote my first book, Humble Heroes. During the pandemic, I was hearing about people who were doing great work without any recognition and I wanted to tell their stories. These are the kind of positive people I find inspiring.

HOUSE OF THE DRAGON EPISODE 9 RECAP BLOG: What’s warmer, the beast under the boards or the feet under the socks?