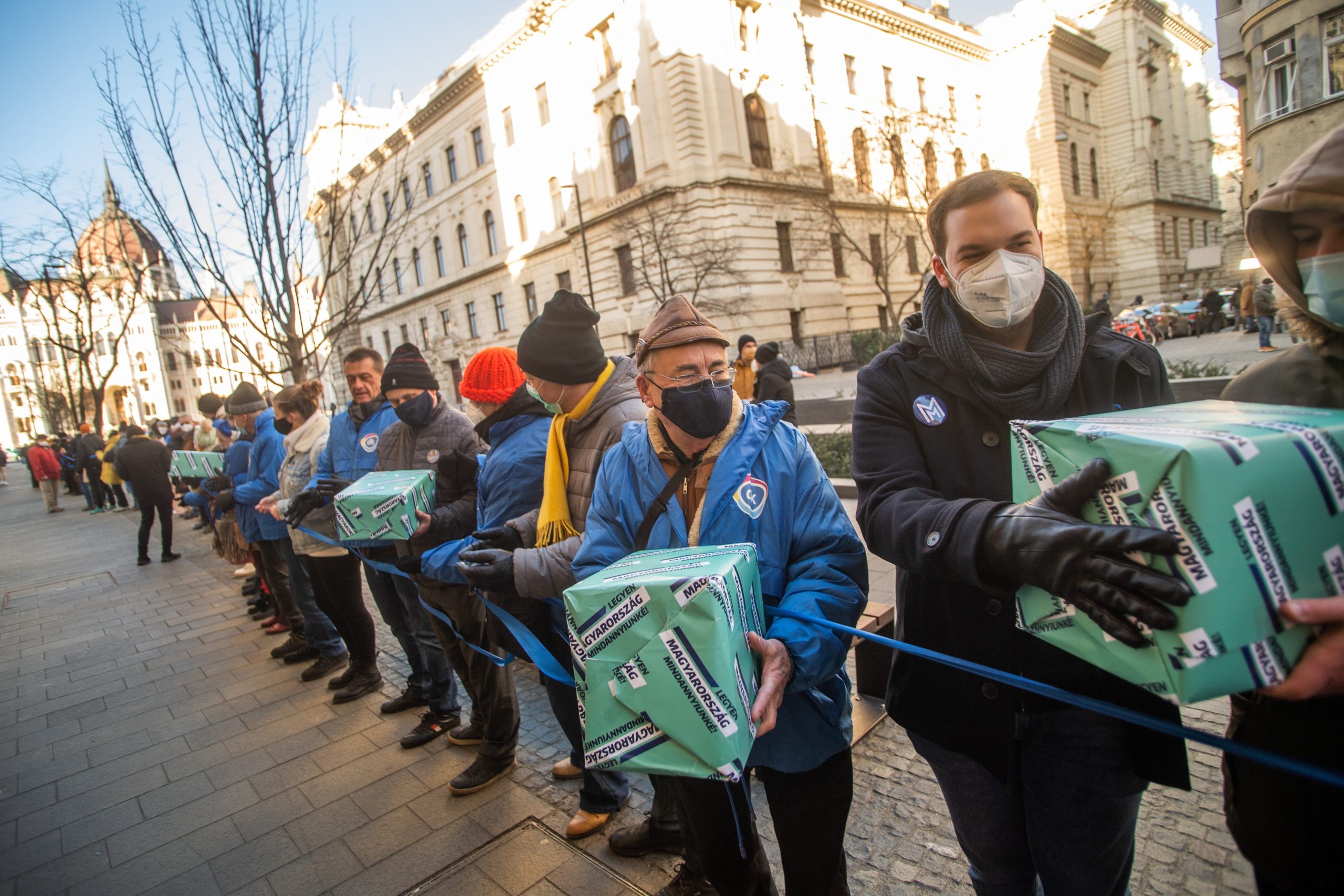 Concluding their signature campaign, the opposition alliance on Friday handed over the 235,000 signatures supporting each of their referendum questions to the National Electoral Office. Collecting them took longer than expected, so the cThe chances that the two-question referendum will take place at the same time as the general elections are slim. Although Gergely Karácsony said there is no legal impediment to doing so, and “if Fidesz prevents this administratively, it will send another very strong message to the Hungarian people.”

While the National Election Commission (NVB) approved only two issues (the one protecting the student city project and rejecting the arrival of the Chinese state university Fudan, and the one on the extension of the allowance job seeker) out of five, the opposition parties wanted to collect 200,000 signatures. in mid-January, with some even hoping for a conclusion at the end of December.

It was delayed for a few days, but on Friday their representatives finally submitted the documents.

Too little time to succeed?

February 12 is the deadline for President János Áder to call the referendum to be held at the same time as the legislative elections. Until then, the National Elections Office (NVI) will have to verify the signatures (200,000 valid ones needed), then the National Electoral Commission (NVB) will have to draw up the results and send them to the Speaker of the House László Kövér (Fidesz).

The National Assembly must then order the referendum, which can still be appealed to the Constitutional Court (CA) within five working days. If someone files a constitutional complaint, AB has an additional five days to make a decision.

Therefore, according to the MSZP delegate member of the Electoral Committee, András Litresits, under such conditions it is doubtful that it can take place on April 3.

The head of the pro-Fidesz Center for Fundamental Rights think tank also stressed that there was still a long way to go before the vote could take place.

The last time a referendum initiated by an opposition party or parties was held in Hungary was in 2008. Since then, referendums have only been held on issues proposed by the government.

Earlier, in an interview with the government-critical Conservative weekly magyar hang, Péter Márki-Zay announced that due to several obstacles, doubts and inner conflicts, perhaps their motivation was not the greatest either. He argued that in his view, the forces in power would not allow the vote to take place at the same time as the elections (unlike the ruling parties’ controversial LGBTQI-themed referendum, in which case, due to the initiative of the government, the procedure was cut short and given the green light a long time ago).

Reacting to this, FM Szijjártó said that “another international bureaucrat has joined the international LGBTI chorus attacking Hungary”. Continue Reading

“It is clear from Viktor Orbán’s press briefing that whenever the opposition collects signatures, the [Supreme Court] Kúria will delay approving questions until she stops them from appearing on ballots on Election Day. Therefore, it is natural that the opposition does not devote all its resources to collecting signatures.

He however denied that it would have been something intentional, also blaming the timing of the trip (holidays and cold weather) which definitely made opposition activists less available and active.

Opposition: the referendum a way to “give politics back to the people”

During the joint press conference held after the politicians deposited the signatures in front of the Parliament, Peter Marki-Zay argued (in a post he wrote after recently testing positive for Covid): “…there are two worlds living side by side in Hungary, one distracts from important issues with lies. This is the side that currently scares people with gender reassignment operations for kindergartners, while keeping quiet about corruption and substantive issues.

The real issues (…) are how the state would like and should help people who have lost their jobs, for example, due to the pandemic, or what kind of higher education and housing the Hungarian state should- it provide for Hungarian students, not for Chinese students. “,

he also said, insisting that the real referendum on April 3 will be on a single question: “Fidesz or no Fidesz”.

According to the Mayor of Budapest Gergely Karacsony (Párbeszéd), the implementation of earlier plans to build a student housing complex in Budapest rather than a campus for China’s Fudan University was in the public interest. He also called for a “looser” system for job seekers.

Momentumit is Anna Orosz referred to the large number of signatories supporting the referendum initiative, saying that the united opposition had overcome many difficulties in its attempt to overthrow the current government, and would do so again.

Erzsébet Gy. Németh of the Democratic Coalition (DK) said the required number of signatures had been collected as “the government was doing everything” to thwart the initiative. She called for continued support to ensure “this country has a new democratic government”.

According to the socialists (MSZP) Deputy Head Imre Komjathi, “deceptive government propaganda cannot cover a crisis ‘in which people were struggling to make ends meet’ while the government is busy lining its own pockets and those of its cronies”.

Parbeszed co-leader Timea Szabo said collecting signatures for the opposition referendum campaign had taken just 30 days and that the referendum could be held at the same time as the April 3 general election. If President János Áder set a different date, it would “go against the will of the Hungarian people”, she added.

PMT co-leader Mate Kanasz-Nagy argued that the referendum was “becoming increasingly relevant.” He accused relatives of the ruling Fidesz party of “looting without any inhibitions”.

After the press conference, a human chain was formed to convey the signatures collected from Parliament Square to the headquarters of the National Elections Office nearby.

After Life, Maadathy and other titles to watch this weekend

The European Parliament adopts its position on the Digital Services Act