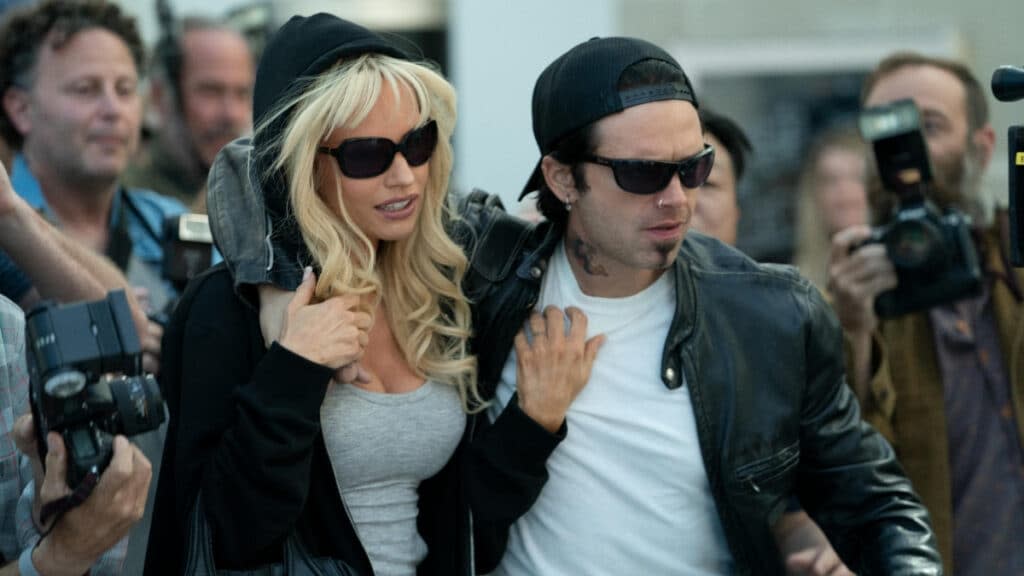 Truth, as they say, really is stranger than fiction, and this week’s lineup certainly suggests that the old adage is true. From a 90s sextape scandal to an app-based scammer to the ongoing discussion of a disgraced comedian, this week is full of stories that have originated in real life, full of weird details and seemingly impossible. (Given the state of the world, the inclination might be to escape into grand fantasy worlds. But when our own world is so provocative and full of eerie details, it’s pretty irresistible.) Olympics are back and weirder than ever!

This miniseries based on a true story depicts the events surrounding the release of the oddly groundbreaking sex tape that inadvertently starred Pamela Anderson (then a Playboy pin-up and star of the syndicated hit “Baywatch”) and Tommy Lee ( drummer of 80s heavy metal band Mötley Crüe). Lily James plays Anderson and Sebastian Stan plays Lee, with each actor completely disappearing into their respective roles, both physically (thanks, in part, to bizarre prosthetic makeup effects and endless fake tattoos) and psychologically, so that they go through the emotional roller coaster. to have a leaked private tape and become a commercial phenomenon. Seth Rogen plays a despised entrepreneur who accidentally discovers the tape (Rogen also produced the limited series), and Nick Offerman is Uncle Miltie, his pivotal porn buddy who was key in the tape’s wide distribution. The first three episodes were directed by “I, Tonya” and “Cruella” mastermind Craig Gillespie, who infuses the story with a wild, hedonistic energy on par with the two young lovers. It’s a show full of zoomed-in cameras, foul language, and a sequence where Tommy Lee talks to his penis as he spins around like a boa constrictor. Plus, more ’90s needle drops than all three “Fear Street” movies combined. If you’re up for a blast of 90s nostalgia that still takes a while to enlighten all the gamers who got caught up in the scandal, this is for you. [REVIEW]

It’s hard to think of a show in recent memory that has generated as much discussion, conversation and controversy as “And Just Like That,” which started life as a seemingly innocuous continuation of “Sex and the City” but blossomed into a real water-cooler show. (Given how few of us are back in offices, the water cooler might be of the virtual variety.) Thing is, it’s a finale has already become a lightning rod, and it doesn’t hasn’t even aired yet (Chris Noth, aka Mr Big, was dropped from the episode following sexual assault accusations). So you’ll definitely want to see this one, if only to fully discuss it. Will Sarah Jessica Parker, Cynthia Nixon and Kristin Davis return for the sequel to the adventures of their “Sex and the City” characters? Or was it a unique revival? That too remains to be seen. [REVIEW]

Since we can’t get enough of the scammer stories (have you ever watched “The Puppet Master”? Holy moly!), the producers behind the deeply unsettling documentary sensation “Don’t F*ck With Cats” are from back with another real-world scenario that will undoubtedly have you screaming “WTF!?!?!” This feature-length documentary chronicles the crimes of the man known as Tinder Swindler, someone who “has seduced and defrauded young women out of millions and is a fugitive from justice in several countries”. The trailer makes it look like it’s going to be part thriller, part revenge tale, and incredibly juicy. Those looking for a new documentary obsession may have just found it. And you didn’t have to download a single additional app. [TRAILER]

The new four-part series from filmmaker and comedian W. Kamau Bell recently debuted at the (virtual) Sundance Film Festival. The series, which examines both Bill Cosby and his crimes, has received positive reviews so far outside of the festival. The official logline promises that Bell “explores the complex story of Cosby’s life and work, weighing his actions against his indisputable global influence through interviews with comedians, cultural commentators, journalists and women who share their most personal and heartbreaking encounters with Cosby.Through archival footage, Cosby reveals who he may have been all along – the antithesis of the principled public figure who became a hero, not just to the African-Americans but for all people.It will no doubt be a fascinating, at times deeply unsettling, look at the curdling of an American icon. [TRAILER]

Do you feel that? Yeah. It’s “Scream” fever. Between the excellent new movie (just called “Scream”, now in theaters) and the multitude of articles that have been re-evaluate and classify the original films, it’s nearly impossible to escape the groundbreaking comedy horror franchise. And why not extend that love to the 2015-19 spin-off TV show, which aired for two seasons on MTV and a third on VH1. Although the series has no real connection to the movies outside of a basic slasher movie setup (the action takes place in Lakewood instead of Woodsboro, for example), it shares a penchant for putting young actors talented in extreme danger, as well as a genuine appreciation for the horror genre. Additionally, the show has amassed an impressive roster of indie horror directors behind the camera, including Leigh Janiak (who would go on to the deeply indebted “Scream” trilogy “Fear Street”), Ti West (“House of the Devil” ), Daniel Stamm (“The Last Exorcism”), Gil Kenan (“Monster House”) and original “Scream” editor Patrick Lussier. If you want to expand “Scream”-a-palooza, try the original series. [WATCH]

“Kid Cosmic” is one of the best animated shows on TV. And now it’s coming to an end. The Craig McCracken series, which imagines what would happen to a lonely child who accidentally finds a magic stone from space (imagine if Charlie Brown had the Infinity Stones), aired its first season almost exactly a year ago. And now, with its third season, the book is set to end on Kid Cosmic and his pals, who are now known as the Global Heroes and reside in a glitzy office building in the middle of a bustling metropolis. The less said the better, but if for some reason you’ve never watched “Kid Cosmic”, catch up and browse through these new episodes, which are bursting with all the color, wit, humor and emotion that the show is known for. [TRAILER]

Are comedic murder mysteries making a big bloody comeback? As “The Afterparty” continues to stream on Apple TV+, Netflix presents “Murderville,” starring Will Arnett. Based on a BBC Three series called ‘Murder in Successville’, it’s built around a concept that’s as simple as it is ingenious – each episode has a different guest star, who doesn’t know the rest of the script or the mechanics of the crime. So this star has to ad lib, improvise, and generally wade in with Arnett as they try to solve a mystery. How fun is it? Guest stars include Sharon Stone, Conan O’Brien, Kumail Nanjiani, Marshawn Lynch, Ken Jeong and Annie Murphy. Looks like some viewers might die… laughing. [TRAILER]

Lee Child’s phenomenally successful novel series, first adapted as a pair of big-screen thrillers starring Tom Cruise, is back in TV series form, with a star who most resembles the massive figure and imposing in the center of the books. Definitely more like the character than our beloved cruiser, Alan Ritchson stars as Jack Reacher, a former military cop who now lives a nomadic lifestyle, wandering across the country with only his toothbrush and his ATM card. In his travels, Reacher almost always runs into trouble – there has yet to be a slice where he enjoys a scenic sightseeing tour and a fine dinner at a fine local restaurant – aided by his flair for trouble and his inherent sense of righteousness. This new iteration is based on “Killing Floor”, Child’s first Reacher novel, published in 1997. [TRAILER]

Uma Thurman stars in this highly anticipated new series, an adaptation of an Israeli series called “False Flag”. Thurman (who will also soon be seen in “Super Pumped,” the Showtime series on Uber, and “Hollywood Stargirl,” the sequel to “Stargirl” on Disney+) plays Katherine Newman, an American media mogul living in England. When her son is kidnapped on a trip to New York, four suspects are arrested and their lives are turned upside down. Eventually, they band together to try to find out the truth. This show, which certainly seems like the edge-of-your-seat variety, is overseen by the executive producers of “Homeland” and “The Americans,” who know a thing or two about creating a gripping thriller. [TRAILER]

Yes, this year’s Winter Olympics are going to be very strange for a number of reasons – the pandemic, the history of human rights abuses and ethnic cleansing of host country China, the fact that the Summer Olympics aired just five minutes ago. But it’s hard not to be at least a little excited about the pomp and circumstance of the opening ceremony, even if you have to wake up very early to watch. And you know the games taking place in China are going to have a super weird ceremony! Bring it on! [HOW TO WATCH]

Why Efeso Collins is scaring the Auckland Left establishment