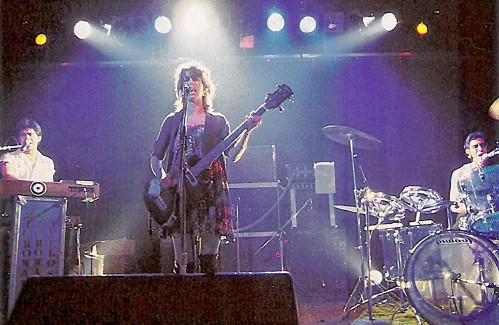 Valley News – A Life: Meg Brazill; “She wasn’t like an experienced musician”

Writing for the December 23, 1979 edition of San Francisco Chronicle, the music critic raved about the singer of Los Microwaves.

The trio, part of a tumultuous scene of bands playing punk and new wave in the Bay Area, came up with their own brand of music which their members repeatedly called “electro-salsa pop” and “post-techno-primitive”.

the Chronic the reviewer called it “some of the best dance music to come out of the new wave”.

The lead singer, whose name he misspelled, was “a lightweight, dark-haired bass-wielding beauty with the energetic attack of, say, Larry Graham”, who “sang like a more melodious, down-to-earth Patti Smith.” Earth”.

Graham was the bassist for Sly and the Family Stone, and Patti Smith was, and probably always will be, Patti Smith.

And the singer the reviewer was ogling was Meg Brazill.

A key member of the Upper Valley arts community since moving to Woodstock in 1994, Brazill was best known as an art and theater critic and arts administrator. But during a span of five years between his late twenties and early thirties, Brazill tapped into a frenzied music scene, toured the country, released an album and influenced audiences in some of the hottest clubs. most famous in the country.

“We were definitely one of the best live bands on the San Francisco scene, one of the few with national exposure,” Los Microwaves’ last surviving member David Javelosa said last week.

Meg Brazill died Dec. 16 of a rare autoimmune disease that caused a rapid decline in health, her daughter, Sarah Callander, said. She was 68 years old.

Born on Christmas Day 1952, Brazill was the third of her parents’ four children, all girls.

She grew up in Buffalo, NY, in a “typical middle-class family,” Linda Brazill, her older sister, said in a phone interview. Their father was a sales representative for a furniture manufacturer; their mother was a housewife.

Although the family had an artistic streak, there isn’t much of an account of how the four girls got involved in the arts.

She sewed and upholstered, baked like a pastry chef, and generally surrounded her daughters with beauty.

Their father was ‘horrified’ that they took up the arts, and they all got teaching degrees at university to take his advice that they have a profession to fall back on.

Meg studied acting at LeMoyne College and SUNY Brockport, where she earned her bachelor’s degree.

She has performed in theater productions on both coasts and it was her acting background that led her to music.

In San Francisco, she and Javelosa both worked in arts administration, and at one point they were up for the same job. Javelosa saw a promotional postcard, in which Brazill was dressed as a musician, and also saw her in a theatrical performance. He suggested she try music.

She had already played the banjo, so she took a bass.

His family were surprised by his foray into music.

“I remember one year when she showed up at Christmas with a little keyboard that you could carry around,” Linda Brazill said. “Can she sing? Did we know?

But at the same time, “it was totally cool”.

Javelosa, who is steeped in music, and Brazill, with her acting background, wrote songs together, and Todd Rosa, whose real last name was Rosencrans, played drums.

“She wasn’t like an experienced musician,” Callander said of her mother. “But there was just this period in the early 80s, there was this experimental and DIY mentality.”

The group began in 1978, at a time when popular music was fragmenting in the wake of the Sex Pistols, the Talking Heads and other bands rising up against the conformity and creeping technology of Western consumerism. The musicians had something to say and the means to make it heard. Devo’s debut album was released in August 1978.

The Bay Area produced punk bands like the Dead Kennedys and new wave bands like Romeo Void, and Los Microwaves were right there with them.

The 1979 piece in the San Francisco Chronicle, written by Michael Goldberg, who later wrote for Rolling Stone, called the scene “fascinating underground rock” in some of the city’s clubs.

“Because they usually don’t have a major label behind them, these bands struggle to be heard on radio or in the media,” Goldberg wrote. “Yet they create some of the most unusual sounds to hear in the Bay Area since the psychedelic rock scene of the mid to late ’60s.”

Brazill and Javelosa started playing at parties and went through a few drummers before Rosencrans appeared. He had rehearsal space, which helped them hone their sound. Within the first year, Los Microwaves recorded a single which helped them book club dates.

They went to New York in 1979 and booked a tour that fall, playing New York and Philadelphia with borrowed gear, Javelosa said.

Upon their return to San Francisco, they recorded another single and played more clubs. They played their first gig in Los Angeles in the spring of 1980.

That summer, they bought a van and booked a cross-country tour. They also continued to write and record original songs.

Their big year was 1981. They moved to New York, where Brazill got a job managing artists. Their only studio album, life after breakfast, was released that fall, and that winter the professional agency they signed with sent them on tour across the United States, taking them to a dozen cities.

They opened for some of the biggest new wave and post-punk bands of the day, including Gang of Four, XTC and Bow Wow Wow. And they’ve played at legendary venues like Max’s Kansas City in New York and Whiskey a Go Go in Los Angeles.

With her long limbs and features and black hair, Brazill really looked a bit like the heiress of Patti Smith and a precursor to PJ Harvey.

“She really brought some of her theatrical energy,” Callander said.

While it was fun to perform and party across the country, it was too much, Javelosa said.

“At that time, we were still quite young,” he said. “Even then, I had this itchy feeling that it was unbearable.”

The tour was exhausting and left little creative energy to write new material.

Los Microwaves continued to tour both coasts until 1982. Brazill continued to work in artist management, notably with such luminaries as Phillip Glass and Laurie Anderson. The band played their last show at New York’s Danceteria in the spring of 1983.

“It felt like a natural time to pull the concept back,” Javelosa said.

Brazill and Javelosa have also recorded and performed with another band, Baby Buddha, and she has recorded solo as Maria de Janeiro.

Brazill met her husband in New York and after some time in Los Angeles, where she studied film at Loyola Marymount University, they moved to South Woodstock with their baby girl, Sarah. In the Upper Valley, Brazill served as executive director of the Pentangle Council on the Arts in Woodstock and worked at the Hopkins Center for the Arts in Hannover. She wrote reviews for New England Art, Seven days and the Valley News, among other outlets.

Although a band may end, their recordings continue and new listeners have encountered Los Microwaves over the years. There are a few Facebook pages that Javelosa maintains, and the music, including some concert excerpts, is there on youtube anyone to find.

“Sometimes she got fan mail, even from people in Europe,” said Callander, a graduate of Woodstock Union High School and now works as a legislative correspondent in the Washington DC office of Senator Patrick Leahy.

Los Microwaves reunited for a show at the Town Hall Theater in Woodstock in 2005 and then again in 2014, four years after Rosencrans’ death. A small label, Dark Entries, reissued life after breakfast that year as well, and Javelosa, who pursued a career in music production, particularly in the video game industry, put the band on YouTube.

“It’s just a legacy,” Javelosa said. “We just need to document everything that happened and keep moving forward.”

In a way, the intensity of being in the band was essential to who she was for the rest of her life. That was when she cemented herself in the arts.

“People were always talking about how much she would light up when she talked about the band,” Callander said.

She carried this experience into her final days, at Brigham and Women’s Hospital in Boston. She only started having symptoms last spring and wasn’t diagnosed until the fall, Callander said. The autoimmune disease attacked his lungs.

“It accelerated very quickly,” she said.

Although the speed of her last illness was a surprise, she was in no pain and present. She seemed at peace.

“She just felt very accomplished,” Callander said. “She felt she had accomplished things that other people might be talking about but didn’t want to try.”

I drive a used hearse