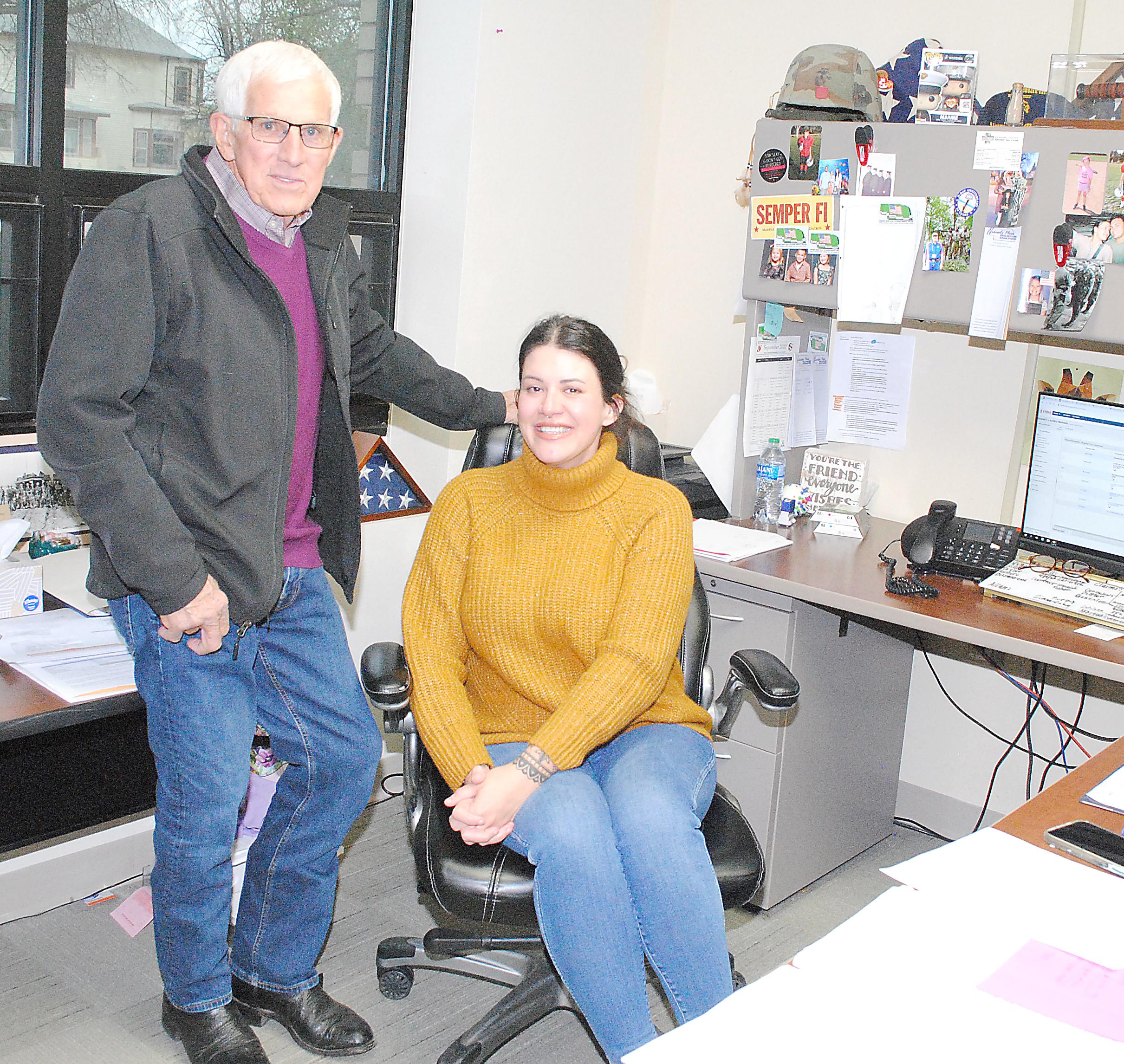 Potts said that over the past seven years, Larson has gone “beyond the way” to serve any veteran who comes into her office, whether from inside or outside the county.

“She really loves her job,” Potts said, “and it shows.”

A Perkins County resident and Iraq War veteran, Larson, 36, assumed her post in 2015 after Larry Kuskie left the post for health reasons.

Larson is from Rosemont, Illinois, where she graduated from high school in 2004.

Choosing to follow in her father’s footsteps, she enlisted in the United States Marine Corps, where she was stationed at Camp Pendleton, California.

For six months, she was deployed to Al Anbar Province, Iraq in 2006, where she served as a driver of motor transport vehicles during the Iraq War.

Upon her return from Iraq, Larson was promoted to the rank of corporal. After four years of active duty and an honorable discharge, Larson and her husband Kris, who is also a Marine Corps veteran and Purple Heart recipient, moved to Colorado in 2008.

It was shortly after Kris took a job in Perkins County, and the couple have lived here ever since with their two children, Brayden, 13, and Lilah, 10.

Stephanie credits her father’s experience as a Vietnam veteran for driving her desire to pursue the veteran’s duty officer position.

“I saw firsthand the lack of help and information that was given to my father and other veterans about the benefits they were not only entitled to but deserved,” he said. she declared.

Helping veterans in any way possible has prompted Larson over the years to further his education in various aspects of veterans services and to welcome all veterans who seek information and help into his office. Currently, she serves approximately 300 veterans in one way or another through her position, 210 of whom have disability records filed with the Nebraska VA.

Larson has helped veterans, and families of veterans, from many counties in her area, and is especially open to female service members who have experienced sexual trauma in one way or another.

“Veterans can choose which office they can receive services from,” Larson said. “They don’t need to stay in their county or state to do that.”

To be able to best serve veterans who seek his services, Larson always stays abreast of regulatory changes at the state and national level.

“She’s constantly pursuing her education,” Potts said. “And she is persistent. If she emails and doesn’t get a response, she’ll pick up the phone and call and keep going until she does.

This perseverance paid off. In the past year alone, Larson has helped area veterans receive $644,000 in disability awards and pensions and $1,210,000.00 in health care benefits. Although the amount of benefits she has helped secure and the number of veterans she serves are quite high, Larson doesn’t like to take all the credit.

“I don’t pretend to know everything, and I don’t,” she said. “But I will do my best to serve veterans and their families who come to my office in any way I can.”

Larson is also heavily involved with the Nebraska State Veterans Council, where she served as vice president and currently serves as president. She also served on the state board of veterans education committee and will continue to do so after her presidency ends in January.

Larson said she enjoys being part of the state organization, and especially being able to give a voice to small rural communities in Nebraska, which are sometimes outnumbered, she said.

“The accessibility of care is different in the eastern part of the state than it is here,” she said. “Near Lincoln, there are several options for VA facilities. It’s not like that here where the nearest VA hospitals and nursing homes are farther away.

Larson admits that sometimes the knowledge needed to complete her job and the tasks at hand seem a little overwhelming, but she loves her job, which drives her to persevere.

“I love being able to show my appreciation and thank veterans by providing a means of information and assistance about the benefits and services to which they are entitled,” she said. “Most of them are so humble when they ask for help. They don’t want to deprive others of benefits, but it just doesn’t work that way. Every veteran in our country has earned these benefits and deserves them because of their service. »

Larson encourages veterans to call or drop by with any questions they have. Larson’s number at the Perkins County Courthouse in Grant is 308-352-7590.