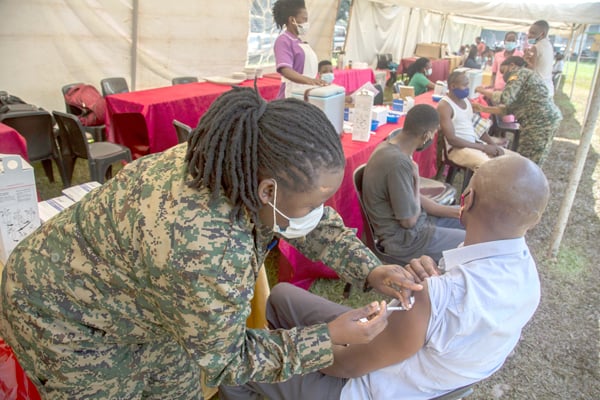 We should rethink the vaccination campaign

President Museveni announced on Thursday that the country and educational institutions will only be opened after seven million Ugandans have been vaccinated against Covid-19. The new target is 2.2 million more than the 4.8 million it originally set as a minimum target.

A day before Mr Museveni unveiled the new target, the health ministry released figures showing that 3.3 million doses of the 5.7 million doses of vaccine the government received through donations and direct purchases remain unused.

Only 2.4 million Ugandans received the vaccine seven months after the government launched the nationwide vaccination campaign. Most of them took a single jab. This comes down to an average of 342,857 Ugandans who take the jab each month.

The ministry blamed the low vaccination rate on limited vaccination points across the country; limited number of health workers to immunize the population and; the decision of categories such as teachers, non-teaching staff, health workers, security personnel and citizens over 50 to avoid jabs.

However, there must be a much bigger problem than it seems if people who should normally know not to take a jab expose them to choose to ignore all attempts by the government to convince them to take the jab. This suggests that the message around the campaign has failed. It calls for an evaluation and overhaul of the vaccination campaign and strategy.

Uganda’s early successes in tackling the HIV epidemic were in part attributed to messages that emphasized “zero grazing” or reducing sexual partners as a way to reduce the risk of infection. The communication strategy then shifted to promoting abstinence, condom use, voluntary HIV testing and counseling, and subsequent treatment programs. A look at how the fight and messages around HIV could be instructive in determining how best to get Ugandans to jump into this jab.